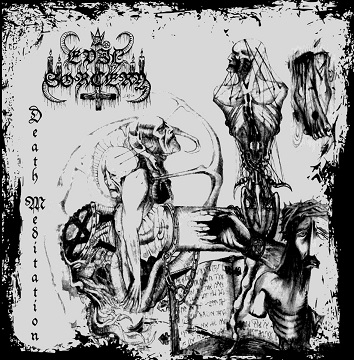 Sometimes you get a promo from a small underground label and straight away judging by the cover you know that it will be “good”. Not much is known about Evil Sorcery. Its an one man Black Metal project from Belarus and that is the only information there is.

Putrid Cult is a small label from Poland and its known by releasing abominations such as Nekkrofukk and Goathrone. Having that in mind I took Evil Sorcery expecting proper underground Black Metal. And it didn’t disappoint me. Although we get only one track lasting 21.33 minutes, there’s so much happening in it that it doesn’t bore me at all. If I had to compare Evil Sorcery debut to anything it would be Italian band Abhor and their “Ritualia Stramonium” album. What connects both albums is that ritualistic atmosphere, hypnotic guitars and use of organs here and there. “Death Meditation” sounds like it was recorded during some kind of black mass in dark and murky basement of a castle. It starts with some kind chants of monks in Latin. It goes for about 2 minutes and then the music kicks in. It starts slowly and very rarely gets to high speeds which doesn’t mean it is slow but for the most of the time we get mid tempo. Main thing it is the atmosphere and its not the kind of very popular shoegaze or your typical Atmospheric Black Metal. No, it’s more of a atmosphere of the second wave of Black Metal from Scandinavia.

Production is not perfect although it’s not recorded on an old cassette tape recorder, the vocals don’t have any effects and still they are more evil and sinister than most popular Black Metal acts, the use of the keyboard or samples are natural and fits the music perfectly and most important it is only an add on, not the main thing covering the core of the music making it sound plastic. And probably this will be the main reason why most of today’s fans of “modern” Black Metal won’t even look at it.

This music is old and evil, almost archaic in its form. It doesn’t fit in trends. It’s released by an underground label which is known for going against the trends. But believe me, if you’re looking for music played with real passion and dedication to the underground and not for trends and money don’t look any further. Evil Sorcery managed to do what many bands won’t be able to do during their whole career. This band created one long track that grabs you with its old, long and ugly fingernails which doesn’t let go no matter how hard you try, pumping poisonous Black Metal in your mouth and ears like a bog when you step into it, choking you slowly for 21 minutes but after that you just want to dive into it again and again. Buy this piece of plastic filled with evil music that most of your friends won’t be able to digest. Probably they will tell you to turn it off and play new Behemoth or Dimmu Borgir. But who cares? You will not regret it. (Sulphur)