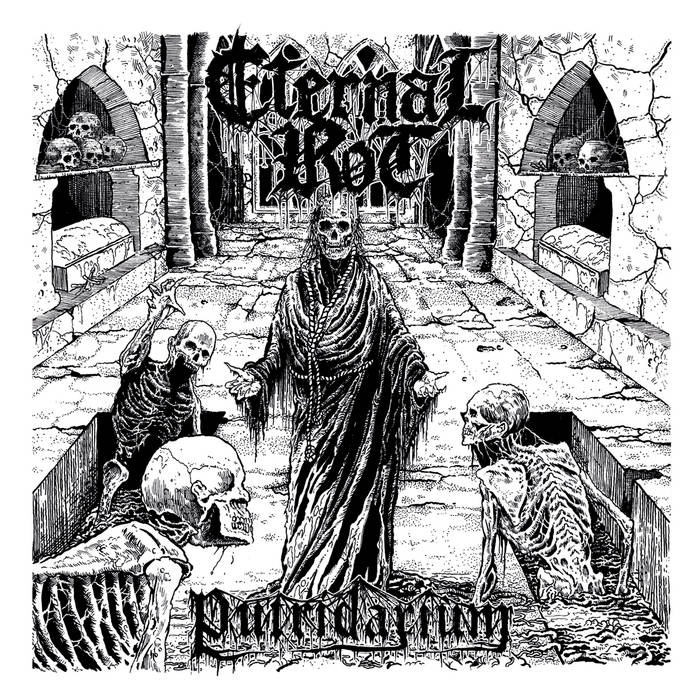 If there’s one thing we like around here at VM-Underground it’s continuity, being able to keep up with bands and often having them reviewed by the same person brings a sense of stability and order to things, much like a good bowel movement first thing in the morning, it leads to a sense of relief and a feeling that we are doing okay and the universe may not be such a shitty space after all. And so it is that after my last massive dribbling nonsensical rant about Eternal Rot’s “Cadaverine” Ricardo thought it might be a good thing if I followed up and covered their latest effort, “Putridarium”. He obviously didn’t read what I wrote, for surely someone slightly more sane may have been given the task..

The general gist of what I wrote about their previous effort consisted of me comparing the band to really, really, REALLY heavy things, like Rhino’s and Tanks etc. The use of basically anything gigantic got thrown in that mix, such was the heaviness of “Cadaverine”, and the word heavy was thrown around with wild abandon. The question then has to be asked, if that was so fucking ridiculously heavy, how could they possibly even match such a thing! Well, I’ll be buggered if I know, but they have. Now somebody hand me a thesaurus because I am going to have to find new words to describe this, or invent some!

First track “Downward Among the Departed” Pretty much picks up right about the same level of batshit insanity as the tracks on the last one, brutally solid Doom/Death metal that reeks of bone dust and decay, it’s even got a bit of bounce to it, like Black Sabbath on an acid trip gone horribly wrong, this thing is just a fucking giant skull grinning right at you and all you can do is smile back while your bladder empties itself and puddles form around your shaking legs. Foulness personified, and a great way to show that these guys have not given up an ounce of heftiness since they last graced our ears.

Number two is where things just get absolutely stupendously ridiculous in the substance department. If the title “Serenity Through Maniacal Flagellation with Decomposing Limbs” doesn’t impress you enough, wait till that first wave of riffs puts you on your sorry arse. Holy fucking motherfucking shitballs, combined with the gurgling insanity of whatever the bloody hell that thing is that sings for them (It surely isn’t human), this has hands down got to be one of the biggest aural batterings the living will ever receive. For near on eight minutes this monster just sends wave after wave of utter despair at the listener, occasionally waning a little to lull you into a sense of false security, you think you have survived and all is okay but then those riffs roll back over you, suffocating, mesmerising, deadly.. Pure magnificence.

Whoah, half way and you already feel like you are on your knees gasping for air, no word of a lie. “Endless Stream of Coffins” contains such fat stinking corpulent density within it’s significant musical passages that they make most other bands out there look like a big bunch of purse carrying nancy boys. This would probably be the most upbeat song these guys are capable of producing, if one could even dare use such a word within the context of their work, And although that may sound a bit odd, after listening to the whole thing you may well get what I mean. It’s got a touch more pace to it than the rest, but one that can probably only be measured in comparison to the movement of tectonic plates or vast frosty glaciers I suppose. Punishing and unrelenting, the inevitability of the horrors of death ever present as it progresses to its end.

“Descent Into Torment” Could very well have been the album title for this release, so fitting is it’s description of what you will endure, Closing the album off in spectacular style and displaying again the game plan of what Eternal Rot are all about. Pick a series of the most hulking devastating riffs you can muster and then batter the listener to death with them with ponderously terrible efficiency. This hideously grotesque thing arises from whatever fucked up dimension it was spawned and drags you slowly and inexorably down, down, down until blackness no longer has any meaning and all life must surely end. Absolutely, utterly, mind bendingly wonderful stuff…

An experience that will certainly weaken the bowels of even the hardest of folk, I cannot even begin to impress on you how fucking stupendous this is. Now I need to go visit the lavatory, for obvious reasons, then I’m sure I’ll feel a lot better ha-ha. You need this, oh yes you do. (The Great Mackintosh)