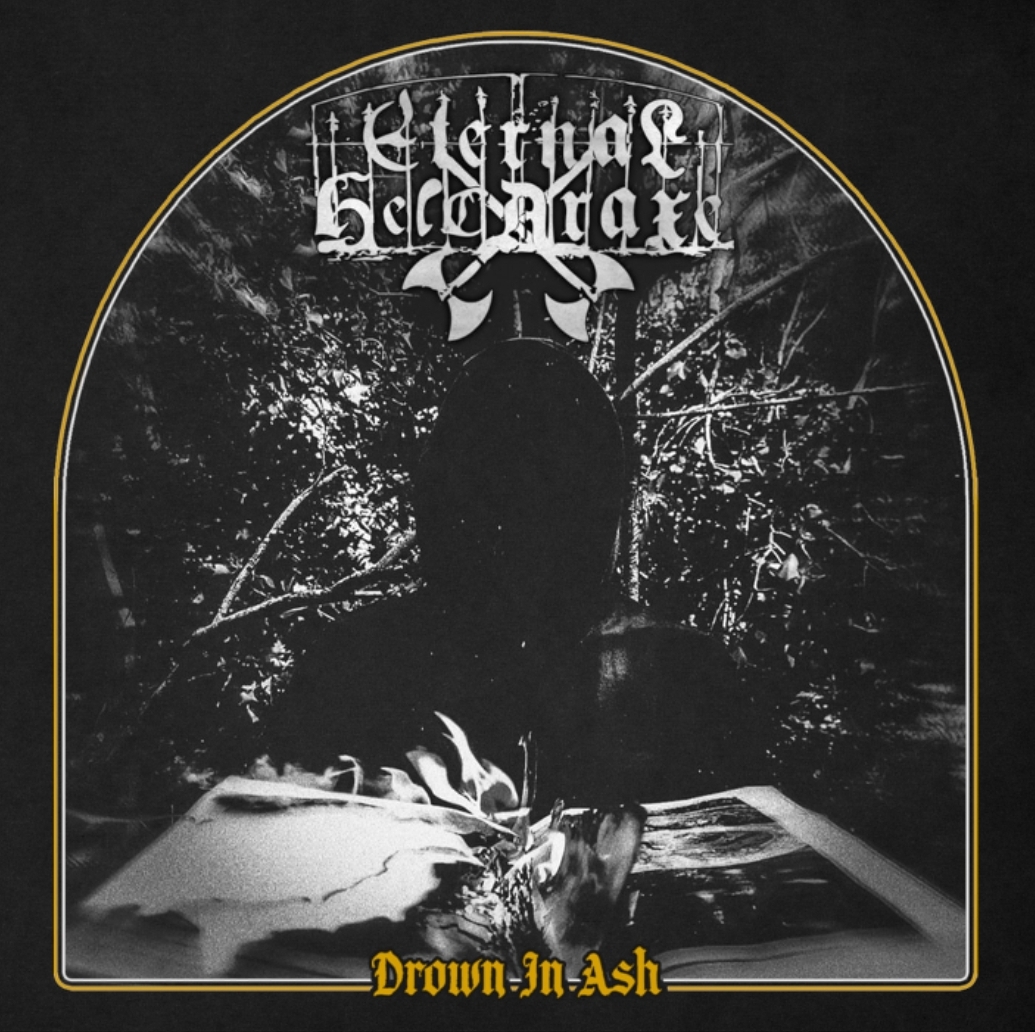 I remember really enjoying ‘Against All Odds’, the debut album released in 2012 by Irish Paganism/Mythology/Fantasy enthusiasts and Black Metal specialists, Eternal Helcaraxe. I also remember being intrigued by the bands name, Helcaraxe being The Grinding Ice  wastes in Tolkien’s ‘Silmarillion’ that formerly laid between Aman and Middle-earth in the north of the world. So having taken a trip into nostalgia I can say I’m very glad the band are still active and what’s more, have a brand new opus to feast upon. I did lose touch with the happenings of the band and so it seems I missed the release of their second album, but ‘Drown in Ash’, their third full length opus, released through Naturmacht Productions, looks to be a very enticing prospect.

There is a stark beauty in the way that Eternal Helcaraxe lead into their album with deft little piano tones, and subtle cleaner guitar chords, before seamlessly blazing into deeply melodic guitar leads, powerfully growled vocals and thunderous drums. It all seems so effortless but if of course anything but! I’m especially drawn of the odd harmonies created by the guitars that form a layered undertone that simultaneously glides along with the unrelenting barrage from behind the drum kit, and the riffs that are darkness personified but with a hint of bleak Folk Metal. Eternal Helcaraxe have mastered the art of being wonderfully melodic and blisteringly heavy without any of the cheesiness that certain bands create.

During the title track ‘Drown in Ash’ there is a wonderful coming together of ice cold tremolo picking, deep, groove laden bass leads and fast, catchy drum beats that sucks you totally into that moment and seems to hold you there forever, before the spell is finally broken by the crisp rasp from the vocals. Also factor in the long drawn out sequence of acoustic tones that leads to further harmonious guitar leads, cavernous drumming and haunting chanted vocals, and the title track takes on such epic dimensions it could be a mini-release all on its own! The track that really contrasts just how heavy Eternal Helcaraxe can be whilst also showcases their melancholy soul is ‘Where Dead Things Roam Free’ whose guitar leads soar so high as to reach the stratosphere and combine with the satisfying rumble of prominent bass play and grandiose drumming to produce a truly bombastic experience, and yet through cleaner vocal sections which remind me a little of fellow Irish band Primordial, EH give a glimpse at the heart and soul of their sound, as does the following piano interlude ‘None of it Mattered’ which acts to break up the intensity for a spell as well as bringing an even more sombre atmosphere.

I’m sure I’ve got my point across by now but I’ll spell it out anyway, ‘Drown in Ash’ is a beautiful album, textured, free flowing and unfiltered, it feels like Eternal Helcaraxe really didn’t hold back in the studio for this one and all ideas where welcome and used to perfection. I can spend hours losing myself in the vast sweeping melodies and the all-encompassing heaviness that the band create. An absolutely stunning album! (Marksson)