Eternal Armageddon – In Light in Dark in Hate 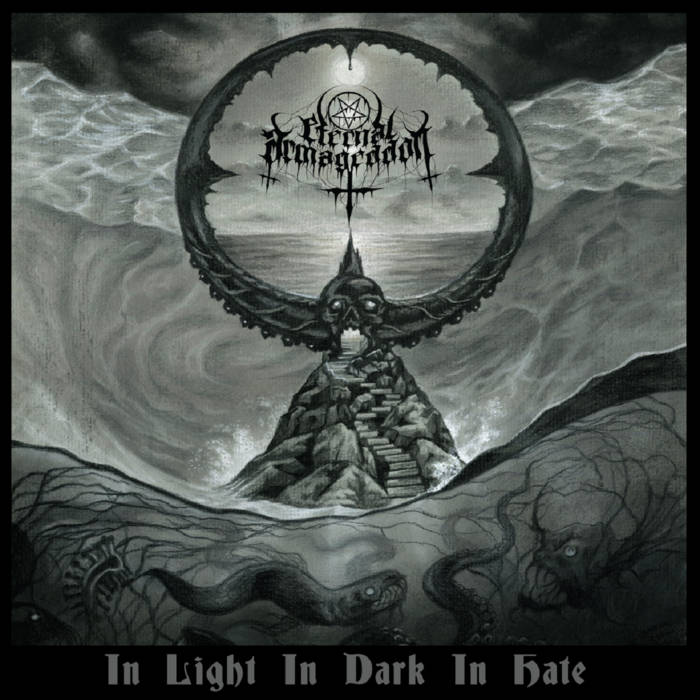 Would you consider describing hypocrisies of religion a new theme in metal? Of course not. Black metal has been ‘fighting’ them since its beginning. Yet, after years of western bands slowly becoming stale on the topic, it’s finally time to get a view from the East. Southern Asia has been hiding several gems from the western world for years, but now it’s definitely time to pay attention to them. One of these unrecognized gems are Bangladeshi trio Eternal Armageddon. “In Light In Dark In Hate” is their debut full length (digitally released in April 2020) and it follows an EP (released in 2011) and a demo (2015).

Even though they started out as a melodic black metal band over a decade ago, their fury eventually transformed into a vicious mixture of Black Metal and Thrash. That mixture should become evident in the beginning of the first song on the album – titled ‘Black Thrash Bastards’ (which is also the title of their demo from 2015) – not only because of the title, but also with the aural attack it brings. Immediately, without any introduction, your ears are exposed to an adrenaline overdose poured directly into your veins which continues for the next 27 minutes, when a mid paced closer ‘Satanic Whispers’ delivers an epic closure to the album.

While not prone to overcomplicating things, this record is far from being simple or stupid. It maintains the rage of thrash (like we used to listen to back in the day) with just enough black metal added to make things sound sinister and raw throughout the album. The album sounds filthy and primitive, yet still intelligent and diligent. The instruments don’t get the polished production, with drums occasionally sounding like they are playing a nasty d-beat and get combined with gritty buzzsaw guitar work, the mixture  which reminds some of us of the days of first wave Black Metal and old school Thrash, so it’s maintaining the middle ground between the fury of punk and complexity of heavy metal. Something these days gets lost in polished production and computer manipulated sound.

Local fans in Bangladesh had the privilege to get a CDR copy of this album (back in 2019), while the rest of the world is still waiting for a remastered digital version (currently available on Bandcamp, Spotify and other music streaming platforms) to get a full release on the record, since this is definitely one of those albums for fans of hard banging, old school sounding albums which still gives away the fact the members enjoy what they are doing and the fury in them is still going strong.

Thanks to my friends Nohttzver, who introduced me to this band and the bands guitarist Turag, who provided the information needed for the review. (Black Mary)