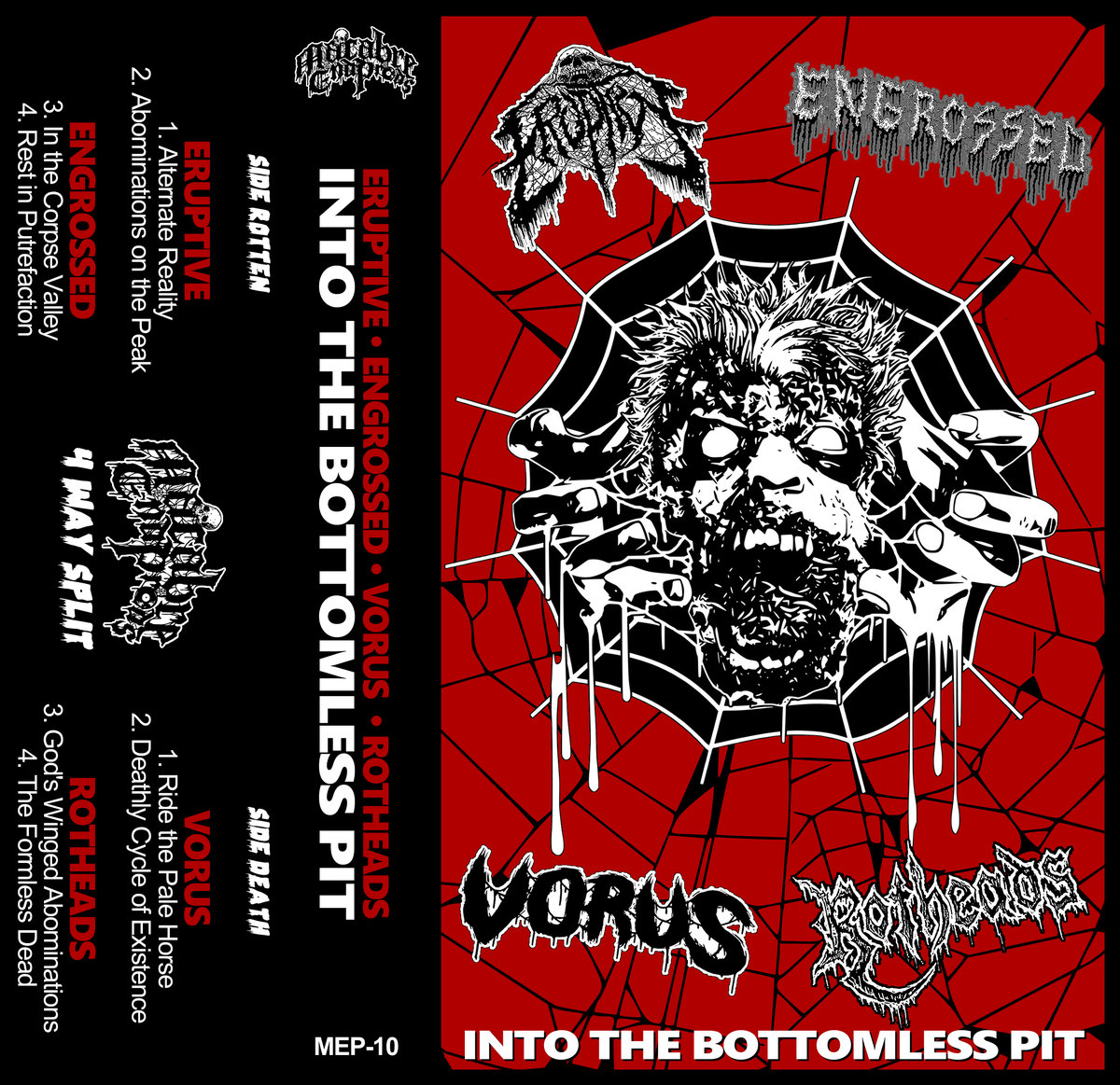 Old houses with cobweb look super eery. Cobwebs are emblems of horror which generates an uncouth fear in us. Now imagine, a beast at the middle of the web holding out ferrum strings which intercepts four death metal band’s names. Sounds cool, right? Well, that’s what you’ll see at the novel graphical cover art of a Death Metal split album produced by the bands named Eruptive, Vorus, Engrossed and Rotheads called “Into The Bottomless Pit”.

The older the cobwebs, the stronger they get and the more horrid they become. Just as well, the more classic old school sound a Death Metal band retains the better they sound. Still now the old school classic sound is deared by the elite listeners. That root Death Metal sound can be heard in every song of this split. So let’s start off by talking about the songs, shall we?

Eruptive, the first band of the split, captured a war spiritual Bolt Thrower styled riffs, doom-ish and buzzsaw sounds on their tracks named “Alternate Reality” and “Abominations on the Peak”.

The next two tracks are presented by Vorus, the Death Metal duo, which never failed to impress with their audible bass sounds and complex guitar riffs. And their tracks “Ride The Pale Horse” and “Deathly Cycle Of Existence” weren’t any less than their kickass previous releases.

Now let’s talk about the old school Death Metal one man band Engrossed. Even though it being a one man band the arrangement of the instruments, compositions, progressions, lyrics…all of them were top-notch. The tracks “In The Corpse Valley” and “Rest In Putrefaction” were the perfect examples of this insanity.

Now it’s time to shed light to the last and maybe the best band between the four in the split, Rotheads. They’re especially known for their cult sound which consists of incantation worshipping cavernous Death Metal sound, various tempo changes and brutal death growls. The growls are so low that most of the times they amalgamates with the bass. The reason may be the recording quality sounding alike of playing inside of a cave, which actually somehow sounds really significant and badass. You’ll get the idea by listening to their two songs of the split named “God’s Winged Abominations” and “The Formless Dead”

This split definitely can be counted as one of the best releases of this year, as it succeeded in capturing the true old school death metal sound. Highly recommended for rotten death metal lovers. (Akib)