Enwretch – Sermon of the Dead [Demo] 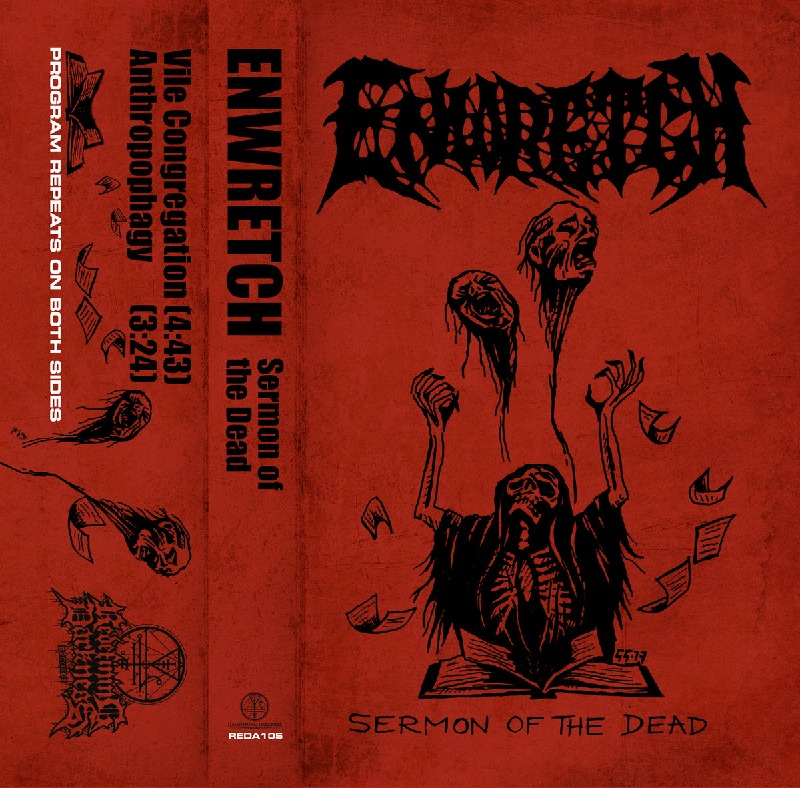 Enwretch is a new filthy horde out of Glasgow, Scotland and they released a 2-song demo in August 2020 entitled Sermon of the Dead. Shortly after the demo’s release Redefining Darkness jumped in with the cassette version. Enwretch began as two friends David and Tommy started jamming during ‘Rona Times, those jams resulted in this mid-paced to slow homage to Death Metal’s more sordid, bottom heavy, brick to the face past. There’s nothing avant-garde and forward thinking here, there is nothing you haven’t heard before within a Death Metal context, and it’s perfectly fine. What Enwretch has in spades is an honest brutal approach and an ear for letting the riffs crawl and slither into your head, or groove and sucking you in. The name of the game here is atmosphere and imagination. David, who drums riffs and growls here, also plays guitar with Coffin Mulch. While Coffin Mulch has the buzzsaw down to a gross science, Enwretch takes us on a grimier Sinister trip.

The first track, “Vile Congregation” builds from rotten doom through tremolo lines that end up in slow leads, throughout the production elevates these ideas and show them to be a memorable and ultimately catchy journey. What stood out to me on this track is how memorable that tried and true polka beat truly is in the right hands – not quite d-beat but crusty and fitting here.

“Anthropophagy” kicks in with feedback before the bass shows us what has been holding these two tracks together. This track has a similar tempo to the previous tune and as the layers become a bit more apparent the punk energy and that Celtic Frost vibe creep up to remind me of what made death metal essential to my ears in the 90s and today.

Check it out if you dig Autopsy, Massacre, Master, Asphyx, Sinister and the first two Pungent Stench albums. (International Acrobat)