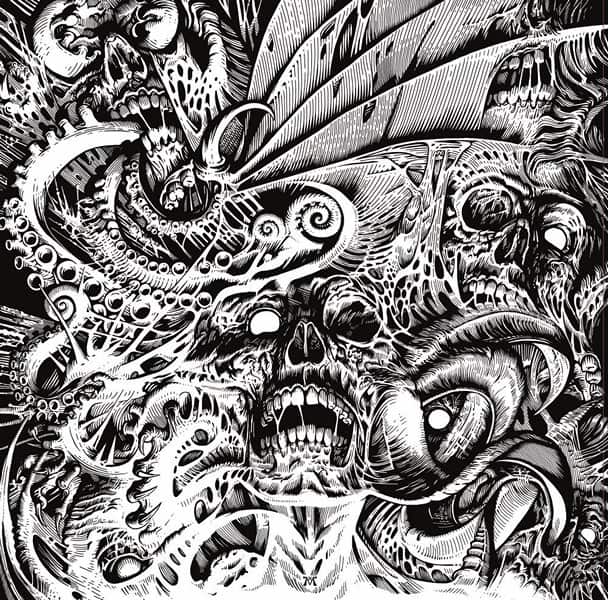 HM-2 madness, Yep, we all love it, but geez it get’s boring after a while. I mean seriously, unless you are the dude that invented the sound and are raking in millions of dollars then aren’t you tired of it as well? Apparently not. We, as MetalHeads still eat this shit up like Australian’s eat Vegemite on toast, and the Danish eat liver paste. Yum, liver paste, I’m hungry now, but I digress.

Entrapment have been around for a while, since around 2010, which for some may be a long time, and others not bloody long enough to be considered even worthy. Their new one “Imminent Violent death” is out now, and should we compare it to their earlier stuff? No. let’s just take it at face value. Indeed this is HM-2 madness, and nothing we have not heard before, BUT, there are moments on this album that make it rise above the proverbial pack.

Take “Incantation of the Grotesque” for example, almost Doom like to begin with, a slower more sluggish riff orientated presentation than the norm, and fucking fantastic for it. The tone of the almighty pedal is nothing when used in the wrong hands, and although a short piece, it certainly shows that Entrapment aren’t afraid to switch gears every now and then. “Malicious Predominance” gives one a bit of a “South of Heaven” (Slayer, duh) vibe before it then get’s a bit trippy, and then adds layer upon layer of calm to the shitstorm upon you, and yes again, those riffs are just fucking insanity. It all ends well for the fan, with a nice little bit of D beat thrown in here and then to keep you on your toes. Fantastic stuff.

“Sacrilegious Congregation” continues this theme of being a tad more melodic before your arse is handed to you on a plate, but they have a way of switching their songs around to keep the interest levels high, and this in itself is always a plus, One of the solo’s in this one invokes an Obituary classic, and it then occurs to you that these guys are not just in this for shits and giggles, they also are huge fans of the Death Metal genre itself. “Morbid Habitation” is just flat out, with a punkish fuck you attitude to it, a razor to the jugular, and a kick in the arse in case you where sleeping.

The end, “Process of Dehumanization” is simply superb. Utterly unforgiving in it’s sincerity to show you that a pedal does not necessarily dictate the way a band should behave, it has all that you want, and more. Intelligent Death Metal. I like it. (The Great Mackintosh)