Ensepulcher – No Sanctity in Death [Demo] 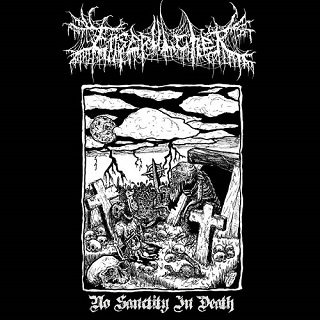 Four tracks are one this demo, and apparently only in digital format or in cassette-version. Well, the opening track is an instrumental one en immediately old school Entombed knocks on the door! With its short duration of only somewhat above the 7 minutes, this one reaches the end before knowing, but hell, they got their teeth in it. This band is from American soil but I’m sure they wished they were born in Sweden, according the overall influence from old school Swedish Death metal. “Perishing in Morbidity” is the first track with vocals and the guttural vocals from Adam is what death metal fans want to hear…okay, not everybody, if you don’t count the modern death metal fans along the hordes. Right, something else I should have started with…this band only has two members in it, and also that fact deserves the thumbs up. You like the  HM-2 guitar-sound, a high dose of d-beats and drum parts where the sparkles evolve from the cymbals, then don’t look any further and check this demo out.  Some punk and grind influences are also to be discovered, so that seals the deal for me! The only minus can be that you’ve been listening to this record for ten times in a row without noticing it by its short length of time, but hey, compare it like eating the pussy, when it tastes, why quit? (Fredde)