Embrace Of Thorns – The Pantheon I [EP] 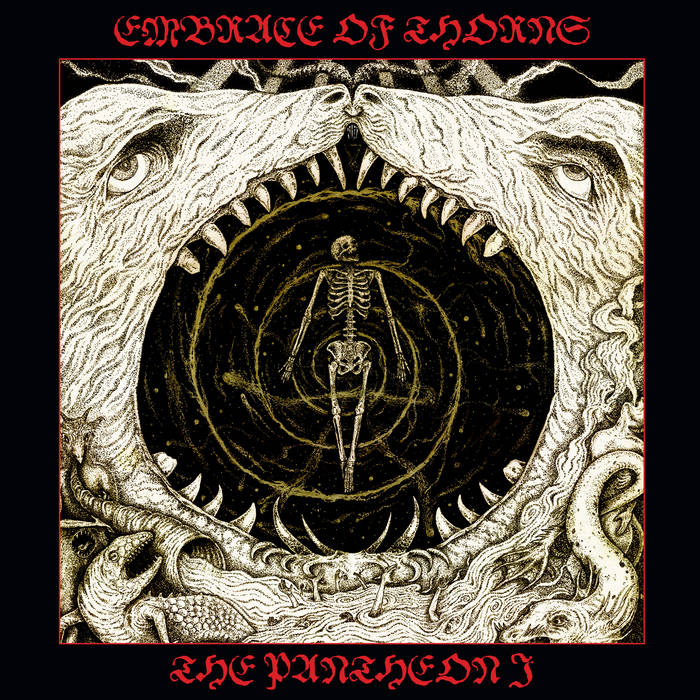 Quite out of the blue comes this nice 7” EP from these Greek veterans with a career spanning over two decades already. During this long career they have delivered around a dozen demo’s, (split) EP’s and five full length albums. With this “The Pantheon I” being their latest offering, which was actually supposed to be released during the cancelled Never Surrender festival in Berlin this year.

Having their roots in Black Metal (started wearing classic Norwegian-style war paint) the band has moved towards a more Death Metal sound, but blended many Black Metal elements in their music. Or, one could also argue that Embrace of Thorns is still a Black Metal band that incorporates Death Metal in their sound… Whatever!

On this 7” EP we again get a bit of both and, as I have been told, this could be marked as some sort of a turning point. The title track on the A-side of the EP has been recorded during the same sessions as their latest album from 2018 (‘Scorn Aesthetics’, released by Iron Bonehead Productions). This track therefor fits within the same frame of that album. It is a bit slower and has a nice sinister riff in the middle that gives the song a dark atmosphere. The other track, ‘Awakening Of The Elder Warlocks’ is quite a different ballgame. It was recorded two years later (2020) and marks a slight change of style. Though it too has a slower part, somewhere half way the song, as a whole it is faster and blends both Black and Death metal in a rather chaotic way, not much unlike the classic ‘War Metal’ style and therefor has resemblances with bands like Angelcorpse or even Black Witchery.

Though I wouldn’t call it a style change or complete overhaul, this EP gives a glimpse of what the future holds for Embrace Of Thorns. ‘Awakening Of The Elder Warlocks’ is an appetizer of what is to be expected and, frankly, in the end this just fits perfectly within the range of the bands’ back catalogue.