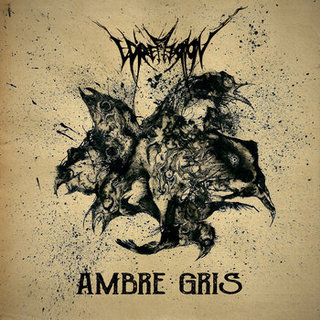 Black Metal and Avant-garde, a very difficult combination as I can be surprised, overwhelmed even…or I’m completely repelled by it. I can’t seem to find the happy medium in this genre and to be honest, it doesn’t happen often that I’m surprised by the music itself as well. Mostly because acts are going for “artistic freedom”, just being weird or different is the main goal but forget to write a decent song. Well, let’s start reviewing then…I bet you think “well, that is a nice starting point to check out an album”, and be that as it may, all my reviews are subjective as hell and so will this one be…so you’re right!

Edremerion from France have released 2 EPs prior to this debut full-length, which contains 5 tracks and mixes their core of the 1990s Black Metal from Norway (both the traditional as the progressive kind) with modern Black Metal (late Satyricon)  and the French dissonance scene while the “Post Melancholy”-label lurks in the dark as well. Well played? Sure, I guess. Interesting? Although it is not as “avant-garde” as labeled as it is more progressive like although some uncanny tones are present, I don’t think it will convince the masses like acts as Arcturus, Dødheimsgard or Deathspell Omega did. But feel free to check it out if you’re into the progressive part of Black Metal. (Ricardo)