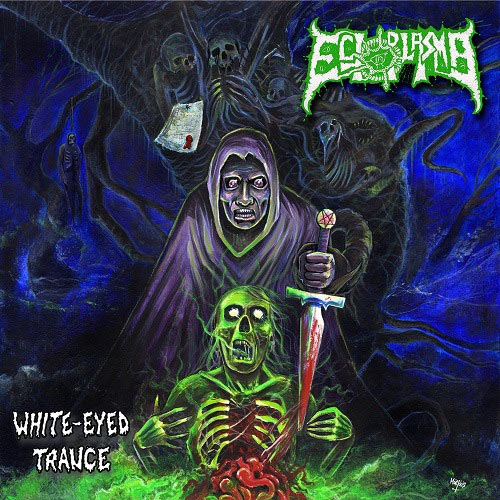 Greece, yeah not the shitty musical or the stuff you use to lubricate stuff with, the country. What a place. Olives. Greek people. Actually fuck that, I wouldn’t have a clue, never been there but apparently it’s nice, and the people are tanned, and they have given us much in the way of Metal over the years. Rotting Christ anyone? (oh, but only there old stuff I can almost hear you shouting), Varathron? Say that ten times after two bottles of Ouzo, you’ll sound a bit like Mike Tyson trust me. Amazing Thrash stuff like Suicidal Angels (I always presumed an angel was already dead, therefore couldn’t kill itself, but life goes on), and fucking Amken, who just so happen to be batshit crazy goodness, the list goes on. They seem to have maybe more Black Metal bands than others, and I blame that on the Olives, those black ones, they also make me upset and make me want to write horrible shit, but I digress.

See, I’m getting somewhere, that you may have guessed is that Ectoplasma are from Greece. All makes sense now hey. Well fucking duh. And as is my usual style, just to flesh things out a little, I then had to look at the name. Ectoplasm is some sort of shite that oozes from the body of a medium (never a large, or a small..) whilst they are in a trance. I call bullshit on all medium’s, and prefer to go with the original Ghostbusters film, and say it’s the goo that someone got covered in while trying to catch some hotdog eating motherfucker, that just so happened to be a ghost. Either way, it’s oozy, and yucky, and this band is most certainly covered in it. From the Guttural vocals to the fact that they almost change pace like they are changing dimensions at times, this is just fan fucking tastic. I dead set swear that the guy on the sticks, who we shall also call the drummer, or (and you couldn’t make this up if you tried), Maelstrom as he likes to be known, could play for Slayer, Judas Preist, and this band all at the same time such is his range, and not even raise a sweat. Fuck hurricane (insert stupid name here), everything destructive will know be known as a Maelstrom… or maybe it was already.

Onto the next bit, you know, the name thing, and we have plasma. A substance you have in your blood, can also be reffered to in electrical terms, and may also be the type of old telly you have lying around that was nowhere near as good as an LCD. Interestingly enough there was an issue in Australia about the amount of plasma content in meat pies many years ago, people where whinging becasue their meat pie contained way too much of it, and it became a scandal of ectoplasmic proportions, and they stopped buying them. Fancy a fucking MEAT pie having some blood product in it. Flesh, and blood, sort of go hand in hand don’t they..I’ll have the blood sausage, just without the blood thanks. Not a fucking chance in hell, it’s all about the flavour you weak bastards!

So this get’s me to the next point, and you have my permisson to sigh in relief. This is Old School Death Metal, and it is a very flavourish thing indeed. You have your goo, you have your blood products, and you have a giant shitload of MEAT in this particular Greek pie. Yep, it’s Death Metal, and although the band have only been around since around 2014, they have grazed well, picked up a thing or two, and then just come out with some bloody awesome to say the least. Everything you want as a Death Metal fan is here, and there is a nod every now and then to some of the classics, but hit me in the face with a bag of ripened olives if this isn’t just the stuff of gooey dreams. I am not a musician (or even a decent writer truth be known), so I repeat the same shit over and over in my reviews, that being riffs, pacing, rumbling bass, vocals that sound like your vomit is coming BACK up your toilet to have a chat, and I’ve already spoken about the Maelstrom so we can leave that. Track three, “Choronzonic Covenant” is the pick of the bunch for me, and is akin to back in the day when you heard the last part of an old Slayer album, not in delivery, just in the feels department. Well, yes it’s as heavy as shit too, so heavy that I’m gonna start using the word ‘Hefty’. This Album has heft, it has much weight, one could even use the word ‘Girth’, but one won’t, because that just sounds fat and horsey. No, my apologies to the band for raving on like an utter lunatic, but this is so bloody good that they inspired me to, so it’s actually their fault..

Absolute killer, with very little filler, and even the filler is so good, you won’t be calling the waiter and saying a fucking word. If this thing isn’t in many a list by the end of year, you can call me Sharon. OSDM at its peak, and what a damn good thing that is to behold. Ectoplasma, yeah get me some of that. It’s gooey, comes in all sizes, and as bloody as a sausage that is made of, well, blood. (The Great Mackintosh)