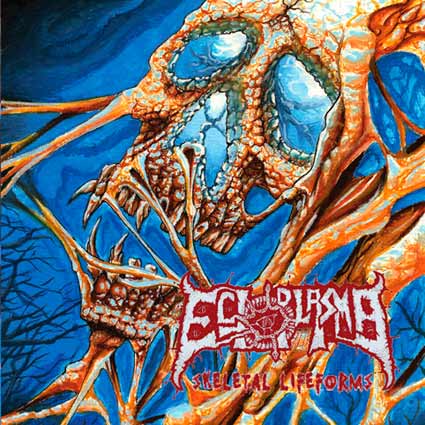 Ectoplasma are at it again! Like on their debut “Spitting Coffins” the tank commander of Division “OSDM-Greece” fired a couple of fine Old School Death Metal tracks in the early 1990s US style. A fine blend of Autopsy, early Monstrosity, first Cannibal Corpse (just take a listen to “Slain Meat for the Beast”) and Baphomet with lots of pace changes, variation, good leads and sinister atmosphere. Not in the last place by the hoarse and raw growl of Giannis Grim. Another influence of the band can be found in a cover of Demigod’s “Towards the Shrouded Infinity” of their mighty “Slumber of Sullen Eyes” album. I really think this EP is a step forward comparing it with their debut album. If you’re into Old School Death Metal and enjoy to support new acts, Ectoplasma is worth your money. (Ricardo)