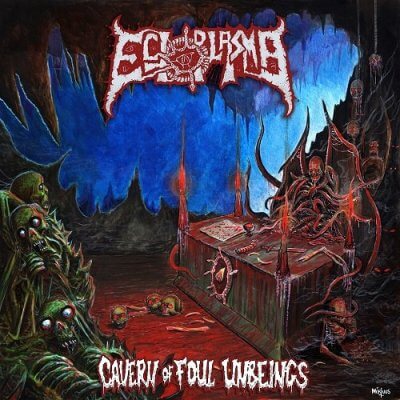 Greece has a lot to offer right know, not only in Black Metal but also a lot in Death Metal too. One of those bands to keep an eye on are Ectoplasma. Founded in 2013, they already  released a demo, 2 splits, an EP and one full length in 2016. 2 years later they`re back with a new album of old fashioned Death Metal the American way. Percussive drumming, lots of fills and tempo changes, breaks, tremolo picking, muted chords the New York style, a deeper Luc Lemay version on vocals, nice leadwork, fat basslines (when they appear), great fitting production and everything with some catchiness. Horror samples are thrown in here and there to add some more horror to the entire work. Comparisons could be made to a lot of nineties heroes, but let me mention a few. Old Gorguts, Deicide and some Autopsy can be found in a very appealing mix. Some old Benediction may come to mind to as well (vocals, certain beat with riff progression towards crust/simple tremolo riffing). Fans of old fashioned death metal should check this album. Nothing new of course but it is well executed. (DPF)