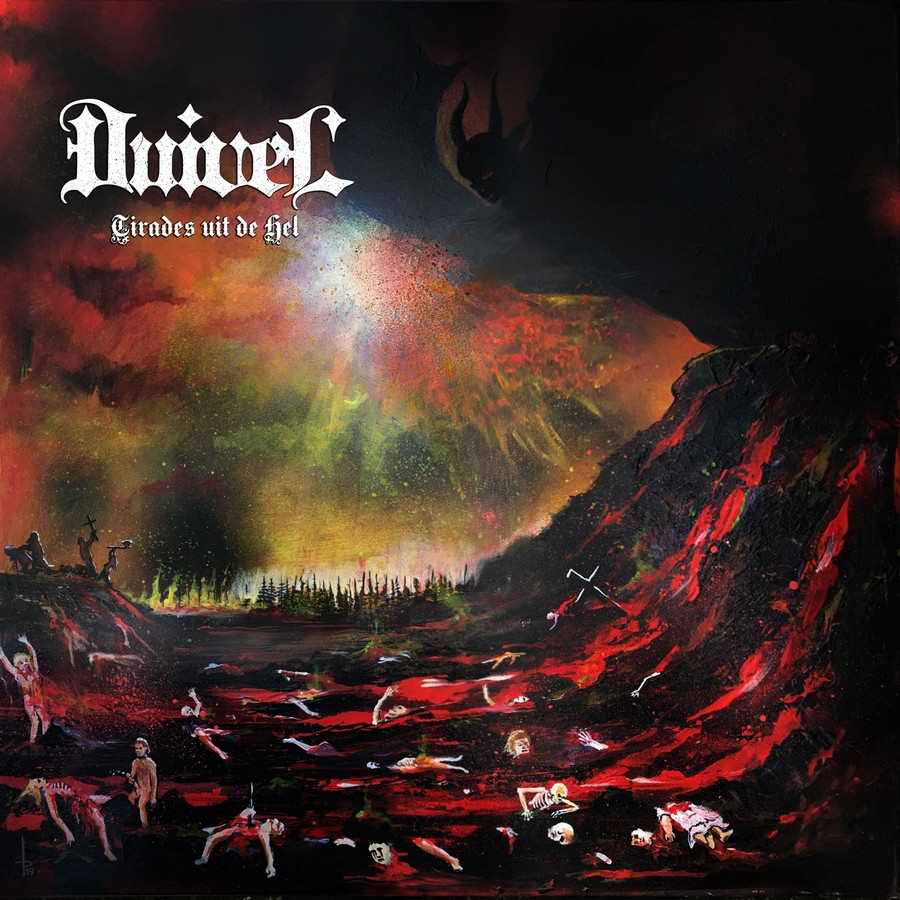 After the more operatic, atmospheric escapades of Urfaust, and other ramifications such as Herder, Heretic and the Devil´s Blood in the past years, N. or Nachtraaf (also infamous under the moniker VRDRBR) decided to return to his atavistic origins in the raw, primitive satanic black metal of the mid to early nineties. Picking up his old craft of guitar again and surrounded by like-minded spirits P. (Black Anvil) on bass, D. (D.R.E.P.) on drums and K. on synths, the base of operation was founded. In 2019 the 2-track self titled EP was already an ominous auspice, which caused the black hordes to hunger for a new sign of undead on the horizon. And here it is now, the full album ‘Tirades uit de Hel’, and that title is a self fulfilling prophecy. Whilst the EP featured old Fluisterwoud compadre Gwydion Sagelinge on vocals, several other vocal chainsaws are featured now. Sagelinge, or S. on the album, is featured on half of the songs. The other three songs each feature a guest vocalist, and quite infamous guests, but more about that later.

‘Tirades…’ kicks of with a feedbacking guitar head forward into the raging opener ‘Schim der Wreken’. Filled with whirling guitar riffs that are slightly thin, blurred and hypnotic. Sagelinge’s reverberant vocals make little effort to hide his flagrant madness. With a thumping bass with some interesting lines and hard hitting drums, you are sucked into a limbonic vortex until the dreamlike synths enter after the first verse with a little demonic touch and a short pause for breath, giving false hope before the insanity continues, all the way towards the Quorthonesque guitar leads at the end of the song. The other songs featuring Sagelinge on vocals are first of all ‘Het Zwarte Hart van Walging’, a more mid paced approach with the drive mainly by the rhythm section (awesome bass parts and almost jazzy drums), layered with melancholic synths and the guitars like a suffocating mist of darkness. Last part of the Sagelinge Saga is ‘Hond der Primaten’. A slow, brooding slab of Black Metal where the repetitive guitars remind me somewhat of Darkthrone’s work on ‘Ravishing Grimness’, forming an interesting contrast with the variation coming from the both rhythmic as wel as melodic bass parts. Reminds me of Tulus’ ‘Pure Black Energy’ more than once.

Now, for the guest vocals. ‘Offerande Aan de Schimmen Der Afgestorvenen’ offers us the utterly recognizable screams of former Lugubrum alumnus Barditus. With an almost military drum drive, the songs drags us through muddy trenches of infernal warmongering, with keyboard parts that display similarities with those of Enslaved on ‘Vikingligr Veldi’. ‘Dolend Verteerd’ is another ripper with N.’s Urfaust brother in arms W. (IX) screaming at us. Fast parts are interluded with more pounding pieces that could have come straight from the mind of a Mr. Tom G. Warrior. Especially the moments when the vocals tend towards cleaner areas, they shape a more than obvious link to W.’s Urfaust work, which make an interesting combination with the different style of Black Metal in the musical department. Last but not least, closing track ‘Sluimering Van de Dood’ is larded with the sandpaper throat of Vaal, of the eponymous main man of the Dutch Black Metal band. This songs leans more on the excellent guitar riffs, and therefor the most traditional approach towards primitive Black Metal.

A well crafted album, and a very fitting tribute to the sound and attitude of the second wave of Black Metal, but has far too much qualities to be named just a tribute. A haunting work that has the potential to evolve into a (cult) classic in its own right. (Stijn)