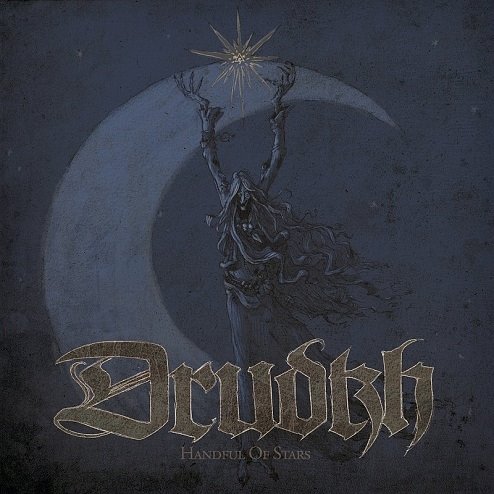 Another superb release from the more underground division of Season of Mist, the excellent Underground Activists. Drudkh are the quintessential underground band and is only fitting that their 6th album is released by this well supported but uncompromising label. The legendary, mysterious Ukrainians have been flying the flag for their country and for Black Metal since 2002. Having stuck to their ideals of spiritual and musical self-improvement since the beginning, Drudkh so far experimented quite broadly with their expressive and melancholy music, exploring through rich, intensely vivid soundscapes influenced by heavy, progressive and folk. Such dedicated work culminated with their beautiful last album “Microcosmos”.

With this brand new “Handful of Stars” the band has chosen to abandon itself again in the soothing arms of atmospheric and progressive sounds. The soaring melodies still very much bear the indelible mark of the stark Nordic Black Metal that forged their backbone, but they are strongly charged with emotional tension. Dripping with mysticism, the agonizing vocals by Thurios seem to hold onto each blistering note for dear life, slowly sinking into the bubbling quicksand of the lacerating guitars, the heart-beat-like pounding of the bass and the superbly measured yet intense drumming. Strangely, by the time the wonderful “Twilight Aureole” begins, the initial cold black winter cape the first half of the album sprawled over the listener turns into a shower of molten lava! Temperatures rise, throats tighten and eyes swell with acrid dry tears: a syncopate guitar solo comes and goes as quickly as a shooting star, and you just feel the tension surging from your stomach right through the chest. “The Day Will Come” kicks in and goes for the kill: breathtaking and beautiful, it races away until the heart pounds in your mouth, and then slows down as if it were forcing you to look up at the gloomiest of skies. Suddenly another mind-bendingly gorgeous solo drenched in all-expanding psychedelic torment announces the sharp conclusion to 9 minutes of pure folly: all there’s to do is “Listening to the Silence”, again… and again… and again… (AlexMF)