Drudkh – Blood in our Wells 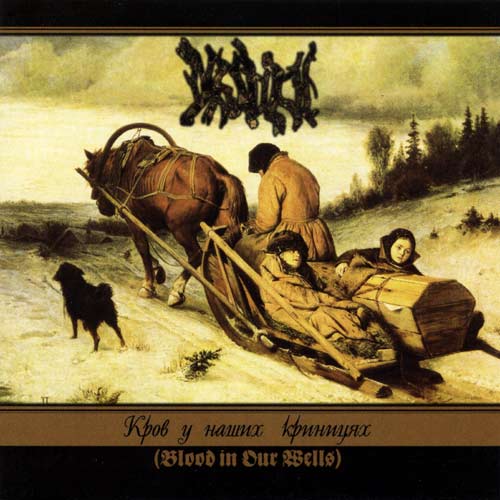 Sometimes an album is so extraordinary it’s impossible to do it justice with mere words. You simply HAVE to experience “Blood in Our Wells” for yourself or your life has not been worth living. Drudkh have evolved into an irresistible natural force in the BM sonicsphere, displaying an epic craftsmanship that seamlessly weaves dizzy folk pastiches and solemn black metal wizardry into depressive-yet-uplifting odes. Therein lies their magic.

With each release in their exemplary discography to date, Drudkh have improved exponentially. Today, the Ukrainians stand largely undetected as one of the most relevant bands on this planet. “Blood in Our Wells” is their fourth and finest release…a rich slab of harsh and sorrow-filled extremity, immersed in pathos and dripping of sheer despondency. Yet, it stirs us…

Drudkh already command cult status through their previous three stellar releases, “Forgotten Legends”, “Autumn Aurora” and “The Swan Road” – from successive years, 2003-05, and their ’06 contribution to the canon should garner them immortality. “Blood…” is a mythical journey into a past that shaped a unique race of people and the result is an organic meshing of atmospheric Burzumic BM dissonance and folk music (the latter is usurped from Oles Sanin’s movie “Mamay”, a traditional Ukrainian parable depicting the age-old struggle for freedom).

Four epic tunes are cloaked lovingly within two dejected instrumental offerings. The tearful two-an-a-half-minute opening lament is lifted directly from the aforementioned Oscar-nominated film and is followed quickly by the magnificent “Furrow of Gods”, the first album track proper. The four centrepiece tunes (2-5) define Drudkh and constitute the main components of “Blood in Our Well”. I won’t dissect the individual songs as this should be consumed whole and you really need to hear it for yourself. Celebrate it. Hot on the heels of upbeat stomp ‘Eternity’, ‘Ukrainian Insurgent Army’ is not, as the title suggests, a call to arms, but a warm, lush, five-minute instrumental that closes proceedings on a poignant, thoughtful note.

The production is slightly less muddied than on previous Drudkh opuses but the overall sheen remains pleasingly unpolished. The same cannot be said for the instrumentation, which is top notch, clean, well-composed and precise. A feeling of abject loss and foreboding weighs heavily on both artistes and listener throughout a thoroughly depressing and divine experience.

Traditional folk interventions are more prominent than hitherto in this band’s career, with occasional meandering acoustic interludes embellishing the canvas and adding depth and scope. The harrowing painting on the cover, depicting a tragic peasant family’s latest funeral scene, is heartbreaking and the imagery, music and vision all blend together into a cogent, uniform whole. Lyrics used on “Blood…” were penned by various Ukrainian poets between 1839 and 1980, while the music was recorded in the summer of 2005, sending rivers of sweat and tears weeping into Drudkh’s bloodstained homeland soil.

Drudkh have reached their creative peak on “Blood in Our Wells” and it would represent a gross error not to acquire this cd immediately. These haunting hymns to a lost Slavonic culture, imbued with heathenism and suffering, portray everything that black metal can (and should) be. Reflecting the gross injustices visited upon history’s downtrodden, “Blood in our Wells”…ironically…makes me grateful to be alive. And it’s a long time since anything or anyone managed that. (GeraldR)