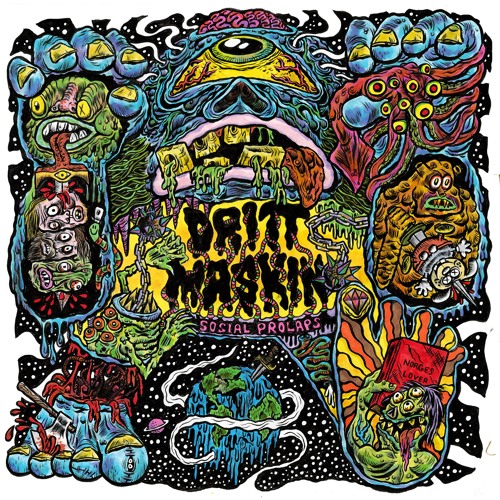 Norwegian Drittmaskin’ s debut album (2018) has now been re-released through the Edged Circle Productions label. After listening to this release I’m a bit confused…what the F did I just listen to?

This album has a duration of about 30 minutes and jumps between different styles. To explain this album  – which is NOT simple: take a bit of Black metal, add some Hardcore shizzle, Speed vibes, Rock ‘n roll, some parts of Grind and Thrash and submerge it with vocals of different styles (fast, gargling, screaming, hoarse, sick and psychotic, …) in the Norwegian language I suppose, and you’ll get a little insight of what’s going on.  The old school sound of instruments is clear, but the total package is perhaps not digestible for every metal fan. I would suggest you to have a look at the official video from track “Angst” and try to figure out what it’s all about.

Strange yet fascinating album, cause at one moment you’re breaking your head about what you hear, the other moment you’re moving your head  on the tunes of “Punkebombs”, you pogo along on the punk speed in track “Himmelen”, to suddenly be out of breath by trying to copy the vocals in track “Evig Kamp”. This release is hard to fathom, that’s for sure, do you have the nerves to step into this puzzle? For people who like a challenge! (Fredde)