Draghkar – Beyond Despair, the Dawn of Rebirth [Demo] 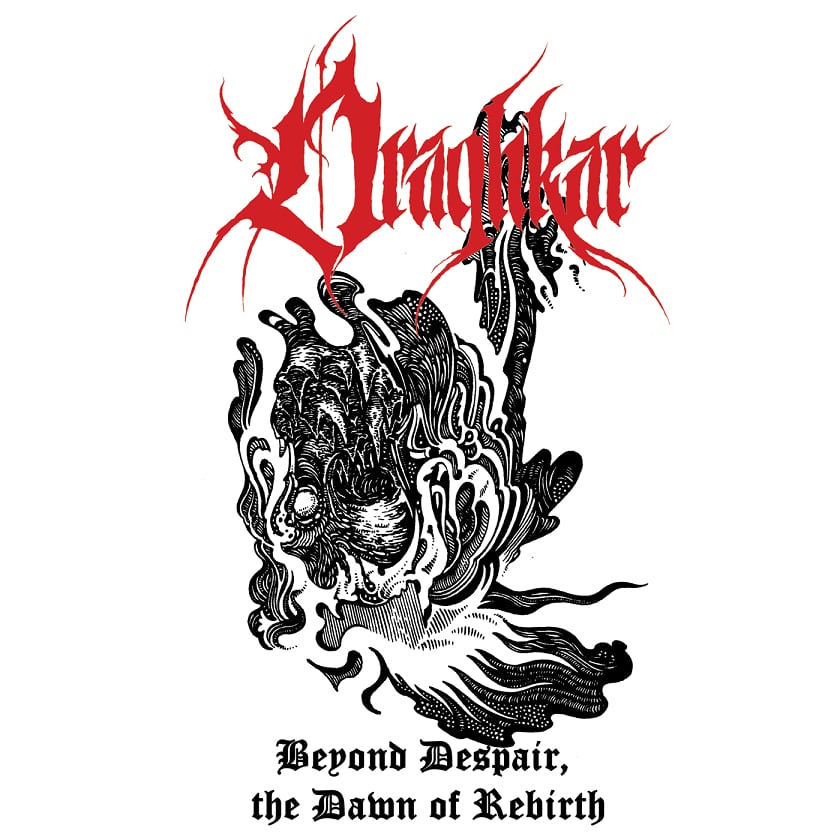 Prolific might not be the best word to describe a band without a full-length release, yet with 6 items in their discography, including demos, EPs, splits and compilations over the past 2 years, California’s Draghkar have been very active to say the least.  They appear to have utilized all possible resources to produce what I believe to be their best material to date. “Beyond Despair, the Dawn of Rebirth” is an eight minute blast of thrashy Death Metal that sets the bar high for their upcoming full length, “At the Crossroads of Infinity”.

The prevailing trend over the past year or two (which is becoming wearisome to some nerds), has seen early 90’s Sweden, Finland and Florida as predominant reference points.  However, there are a number of bands diverging from this paradigm. Casting aside dogmatic and constraining rules pertaining to subgenre compartmentalization. Reaching even further into the past to augment their pool of inspiration.  They are referencing increasingly arcane and obscure dialects with esoteric and enigmatic characteristics from the late 80’s. An era before clear stylistic markers defined Black Metal, Thrash and Death Metal as isolated entities.

Sweden’s Morbus Chron displayed this intoxicating approach several years ago, incorporating dark, cold and enthralling melodies while deftly maneuvering between varying mixtures of Thrash, Doom, Death and Black Metal.  This unfettered approach seems to be catching on globally. We have seen some excellent releases in this vein from Santa Fe, New Mexico’s Superstition, Finland’s Ghastly and Norway’s Obliteration (who in my opinion gave us the best album of 2018 with “Cenotaph Obscure”).

“Beyond Despair, the Dawn of Rebirth” immediately demands attention as new lead guitarist K.S. Kuciemba’s incendiary solo fires out of the gate, seamlessly transitioning into pounding blast beats overlayed with tremolo guitar licks.  Forays into romping, nearly playful segments occasionally arise and, upon return to attack mode, only seem to amplify the tenacious quality of the composition.

The urgent, almost dire, pacing and song structure continues in the second track.  The tenor of “Pursued by Black Forms” exudes darker emanations and would serve well as the backdrop for a raging and turbulent hellride through a tempest of black ash and molten rain.

Thrash-infused, maleficent riffs full of vehemence gash their way through the demo.  Skillful guitar-work is omnipresent, and while maybe a bit too flashy at times, absolutely conforms to the unremitting and exuberant overtones of the demo.  If you ever wondered what Ghost Rider might listen to while vengefully and righteously thrashing the iniquitous with barbed chains astride his fire-engulfed motorcycle, this could be it.

The aura of the late 80’s is nearly palpable on this demo, but perhaps one of the most notable influences may come from very early material from Greek legends Septic Flesh.  Specifically the 1990 demo, “Forgotten Path” and 1991 EP, “Temple of the Lost Race”. Prior to the incorporation of symphonic elements, they spewed a venomous mixture of thrashy, black death akin to what is displayed by Draghkar.

Vocalist and Guitarist Brandon Corsair has led the band through a number of lineup changes over the past two years, steering Draghkar toward the ideal formula moving forward.  He has noted that the intent of this demo was not only to debut the new lineup, but to court record labels for support prior to recording their upcoming full length. Well played Brandon…you just drove a Corvette filled with booze, condoms and a waterbed to the dance.  If this demo did not grab the attention of any labels, I am not sure what will. (Chris Topher MC)