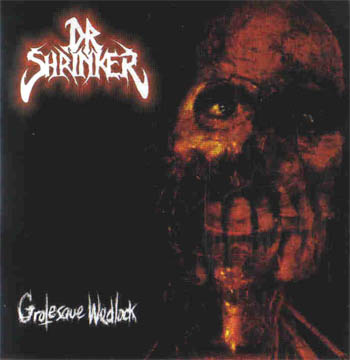 Dr. Shrinker, a character from a sitcom on American tv during the late 70’s/ early 80’s, but also the name of an underground death metal band. After releasing some demos and a live album, Dr. Shrinker was history until Revenge Productions released a split 7″ with Nunslaughter. Necroharmonic got in contact with Matt of Dr. Shrinker and there you go…a collection of Dr. Shrinker’s debut “Recognition” 1988 demo, the 12 track demo “Wedding the Grotesque” from 1989 and the “The Eponym” EP from 1990.

The recording has a typical love or hate sound. When you are listening to the big names of the scene with the better productions, you would probably think; why would they release this piece of shit? For the ones who have the Death, Morbid Angel, Brutality, Amon, Nihilist and Immolation demos in their collection, the sound is a trip through memory lane. Although Roger Beujard (Mortician) has re-mastered the demos, it still sounds as if they have been copied from old dubbed tapes, which is a big compliment! Some sound differences now and then, fuzzy guitars/bass at some times but still everything sounds clear. And all this, with the old school feeling from that time! The death metal presented on “Grotesque Wedlock” can be described as a mix of old Autopsy and early Death. Of course the demos are slighlty different from each other as “Recognition” definitely has some German thrash influences in some riffs, and on “Wedding the Grotesque” a vocal effect, much like Sepultura uses on their debut, has been used a lot. On “The Eponym” the vokills remind me of Don Doty (Dark Angel), Corporate Death (Macabre) and, more restricted, Martin van Drunen (Asphyx/Pestilence). Just listen to “Tighten the tourniquet”. These songs are definitely more advanced than the demo songs.

Old school deathbangers should really check the “The Eponym” songs as it’s a great example of how Dr. Shrinker sounded at their peak and it stresses that it’s a shame the band quit in the beginning of the ’90s. I think they could have released some influential albums back then. (Ricardo)