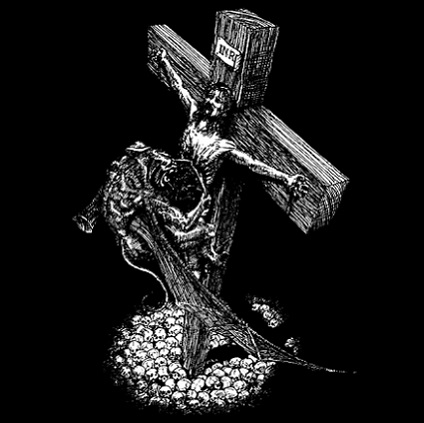 Some of you might remember the ominous “Devil Cult” CD from Dutch Domini Inferi from 2006. Main man behind this band is the infamous Hellchrist Xul from Funeral Winds.  A creepy album, full of dark ritual sounds, venomous satanic Black Metal and uncanny ambient influences. And a remarkable album this is/was.

But before that there was the “In Nomini Domini Inferi” – a bestial demo, featuring inhuman brutal Black Metal. This demo from 2002, along with many unreleased tracks has now been re-released as a compilation CD. And after all this years, it remains untarnished.

Imagine a stripped down to the essence type of Black Metal with a screeching demonic voice, heavy martial drumbeats and simple, but effective guitar chords. It’s all there…the deep demonic incantations, reversed sounds – all brutal as fuck. Loud, offensive and overwhelming. There’s even a Von cover on it, that feels like a slap in your  face.

Domini Inferi are often compared to Von, Profanatica and Beherit which is correct to some degree, although Domini Inferi are more versatile, less one-dimensional and even more rabid/sickening/deranged, without resorting to a pile of undefined noise.