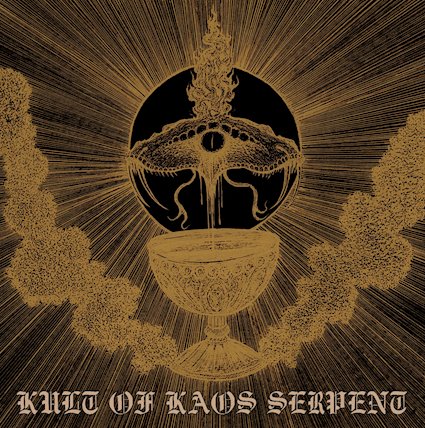 If it is not obvious enough by the title above or the link that you may have clicked on your way to get to this review, this album that we are talking about here is a three way split, three bands on one album. It was released all the way back on December 7th, 2018 by Saturnal Records from Helsinki, Finland and it is only limited to 500 copies. So let us dig into this service dedicated to the “Kult of Kaos Serpent.”

Tracks one through three start the proceedings off with the band Djevelkult from Oppland, Norway. Djevelkult sounds like your typical, yet high class, quality Second Wave of Black Metal band. It may not be anything groundbreaking or “new” but when done right, with great songwriting skills, Second Wave Black Metal is one of the most killer and catchy styles of Black Metal out there. And Djevelkult have captured that essence here and given us three tracks of how it is suppose to be done. Period. Their sound draws similarities with Urgehal, Tsjuder or a band that I just reviewed, Blodhemn. All of whom are fellow countrymen with Djevelkult.

Kyy from Lahti, Finland takes over for the next three tracks of this “Kult of Koas Serpent” worship hymnal. For all intents and purposes Kyy’s sound that we get on these three is the most obscure and “outside of the box,” shall we say, of any of the Black Metal presented here on this split. That is by no means me saying that Kyy is this obtuse, insane take on the genre, it is all very much within the realm of Black Metal and its likes have been heard before but the mix of it handled here is fresh and interesting. The closest comparable way I can explain this band to you is that they are like Finland’s own Impaled Nazarene mixed with Sweden’s Silencer.

The ceremony concludes with Nihil Kaos from Istanbul, Turkey performing the final two odes. Suprise, surprise, it’s more Black Metal. And the Black Metal presented by Nihil Kaos here is rooted in the traditional stylings of Norwegian Black Metal but intersecting that with moments of angular, disjointed and obtuse happenings. Yet it all flows together as one cohesive piece of true blackend art. It all sounds somewhat like a mixture of Norway’s Mayhem or Darkthrone and Sweden’s Funeral Mist or France’s Deathspell Omega. It all works.

It is all Black Metal of varying degrees of styles but the variance in quality is ultimately rather slim, for it is all of the utmost quality, it’s really really good shit here, man. And if this is the recruitment material that they are putting out there, trying to sway me to join the “Kult of Kaos Serpent.” Then I am totally 100% in, sold. Where do I sign up?  (Ben Schultz)