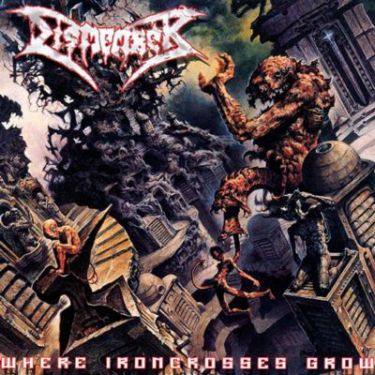 Finally, after five years a new Dismember album. It was like waiting for the apocalypse, it never seem to come. But now it finally surfaced, and while listening the album it just sounds so familiar that the past five years are gone with the wind and it is like Dismember wasn’t away for one single moment. Last year we already got to see them on tour warming up for the recordings and final writing for the album, it was already clear that on those shows the band was ready for the kill again. The usual sound and the enthusiasm was back and the band did a gig to remember (although, they did in The Baroeg, Rotterdam). They let our heart beat warmly with songs like “Skinfather”, “Casket Garden”, “Misanthropic”, “Bred For War”, “I Saw Them Die” and of course the killer “Skin Her Alive”. The spirit was definitely back!

They did everything they could to do their comeback as good as possible, the great artwork – no one else then Dan Seagrave (who also did the covers for Suffocation and Morbid Angel to randomly name two) is responsible for this great looking piece of art – reminds me on the late 80’s and the early 90’s. And with the first tunes all last doubts about the band are blown away, this is what is called old school! No bull-shit, just heavy sounding deathmetal with the dusty and disgusting guitar sound, the raw grunts, rumbling bass and the pounding drums. All in a great mid-tempo with some faster parts; a good variation so to say. It is almost unbelievable but for people not yet familiar with Dismember (or the Swedish sound: older Entombed, Nihilist, Unleashed, Grave, Unanimated etc.), DON’T expect such boring blastfests or even an American crushing sound? This slays even more. This is actually how we like Dismember, the unmistakable leaders of the Swedish scene, yet few changes are audible for the careful listener. A little more variation in the guitars, in fact, the solo’s gained a more prominent place in the songs, no Kerry King alike insane solo’s, shorter Iron Maiden-esque.

I could spend another five hundred words on this great album, but I just won’t. I guess people should experience the brutality of Dismember, this is an album Angels Fear To Listen! (FelixS)