Dismember – The God That Never Was 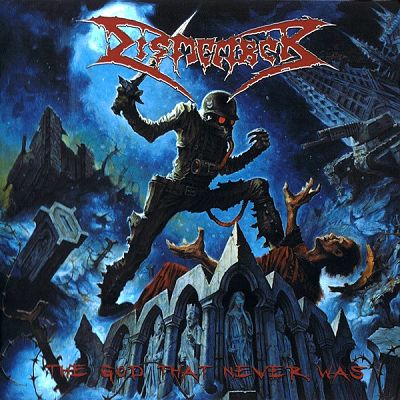 Three years after “Where Ironcrosses Grow” was recorded the Stockholm death metal machine is back to the front lines with “The God That Never Was”. What can I say? There are just a few certainties in life, Dismember being one of them. We all know this band hardly disappoints, because of their total lack of innovation and change. I still remember the time 15 years ago when the typical Swedish death metal got shaped through legendary releases as “Left Hand Path”, “Where No Life Dwells” and Dismember’s own “Like An Ever Flowing Stream”. Let it be clear the legendary debut, with an 18 years old Matti Kärki on vocals, stays untouchable on any point of view. Throughout the years Dismember has put more and more Iron Maiden influences in their sound, without losing the old school Autopsy vibe. This formula repeats itself on ?The God That Never Was?. When hearing the self titled song I was a bit surprised of the untypical guitar sound, but as minutes passed by the familiar raw blunt wall of fuss returned.

The new album may be nothing special the first times you give it a spin. After all, Dismember is repeating itself again. “Time Heals Nothing”, “Autopsy” (finally an ode?) or “In The Temple Of Humiliation”? I’ve heard it all on Dismember’s previous releases. But it keeps on growing and it feels like the 1990s have never ended. There’s no need to say more. The hardcore fans of Dismember will not be disappointed as there are no new tricks on “The God That Never Was”. We all know who’s going to praise the lord and the devil after hearing Swedish finest. (FilipD)