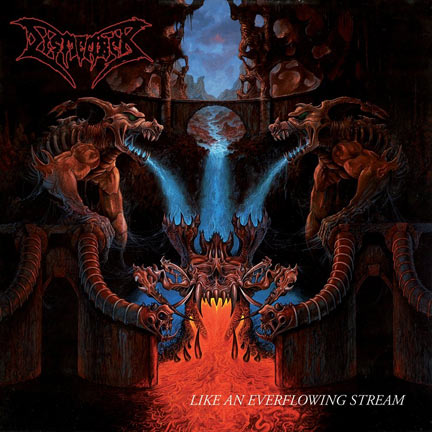 Surfacing from the previous band Nihilist (together with friends of among others Entombed) Dismember will put the name of Sweden definitely on the metalmap. As one of the godfathers of Swedish metal in general and Swedish deathmetal in specific Dismember was one of the first bands to put out an album which really crushed the scene of that day (and in some ways, they still do with this album). A groundbreaking sound, production, image and a complete new style was presented with the first generation of bands hailing from Sweden. A raw way of playing deathmetal completely different from the American way (which already reached the metalheads through bands like Malevolent Creation, Morbid Angel and Deicide for instance) or the more primitive deathmetal like Possessed and Master (US) played. A true harsh and raw sound was reached by both new ways of ‘tuning’ guitars and producing (Sunlight Studios). Besides this a typical game was played between the more up-tempo way of playing and the more dominating mid-paced speed.

The band caused a true following and influenced metalhead for generations to come. An unbelievable debut that crushed the scene and shook it on its foundation. A debut with songs like “Dismembered” and “Skin Her Alive” (the last one was also released on a now long cult 7″ picture disc) is just insane and the – than young – band continued their immense deathmetal crusade throughout the years. So, Dismember has been a constant factor in the metalscene that never let their fans down and never betrayed their roots. A true classick! (FelixS)