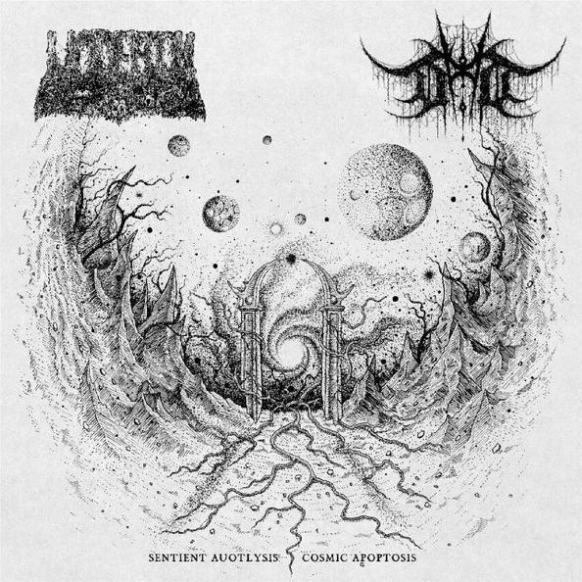 It only occured to me the other day when Ricardo reposted my review of Devoid of Thought’s  “Cosmic Apoptosis” that I had covered both it, and Undeath’s “Sentient Autolysis” many moons ago, and that more than a year had gone by already since both of these magnificent releases where, well, released for want of a better word! Yes, that many bands come and go in between that you often forget such brilliance, so now I get to babble on how sheerly fucking awesome it is that they put both of these monstrous works together on a split, and make no bones about it, this is something you just have to have if you don’t have one or the other, or even both, or just do what I did and buy the bloody thing anyway because it just fucking exists!

Just to fuck with our heads, the running order begins with Italian masters of all things cosmic, otherworldly, and just pure bat shit crazy Devoid of Thought, with their utterly rough, raw and ready attack on the senses that comprises the three songs on “Cosmic Apoptosis”. Here they gaze out towards the heavens as many do these days in the field of our beloved Death Metal, and they give the universe (and you the listener) a swift kick in the backside in the process.

To quote myself on the final track “Stargrave”, and let’s be honest one doesn’t often get the chance so I’m going to, “Stargrave is an all out assault on the senses. No quarter is given, and none asked for. From the guttural belch that it starts with, to the final resounding notes, you will sit as a captive audience in awe. The mid section riffs are enough to destroy the mind, and each and every one of these Gods from another plane of existence is giving us a lesson, and that lesson is purely this. We are as old as time itself, and you WILL suffer under our wrath before we flick you aside as just another meaningless life form that we care not a shit about”. Do I still back that statement? Yes. Most fucking certainly.

Now onto Undeath with “Sentient Autolysis”. Undeath has done nothing but blow my head off since the day I first heard of them, such magnificent riffery, such gloriously fat and thick and ugly music with so much technicality and thought behind it. Four tracks you get here, and four tracks are not near long enough because I want more. All I can do is hit repeat, over and over you bastards! Not a massively different change of direction from their first effort “Demo ‘19”, but we didn’t want them to change anyway. It was perfect, this is perfect, and if I may have the luxury of quoting myself again (you don’t have much of a choice), “Prepare To Shit Thy Pants”. Yep, sound advice right there.

A quick look on google will give you the meaning of both album titles, all I can say is this is a marriage of perfectly linking cells, and it’s all about destruction in one way or another. Magnificence that has aged well. (The Great Mackintosh)