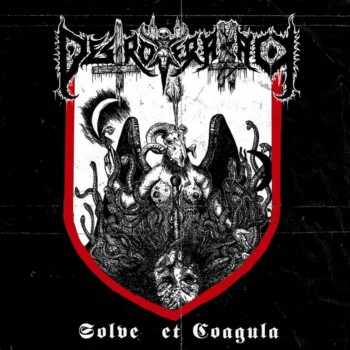 Destroyer Attack hail from Ecuador and have been active since 2011, churning out a bunch of splits, EPs and now this, their second full-length, and also my first meeting with the band.

Their weapon of choice is raucous Black/Death/Thrash that conjures the ancient spirit of bands like Pestilence, Pungent Stench and Sarcofago. The aural attack is intense and will mercilessly bludgeon the listener from the get go. For the most part, the music is played in a speedy vein with a menacing bark leading the attack, backed by apocalyptic chainsaw riffs and a rather terrific sounding percussion. There’s also some solos thrown in for good measure that’s very well executed. Newer bands with whom Destroyer Attack share a musical kinship with would be: Invincible Force, Bastard Priest, Gravecrusher, Beyond, etc.

“Solve Et Coagula” is one of the most intense offerings I’ve heard all year, and could very well be a contender for one of the best albums of the year so far. Do not miss these guys — they mean business. (Mongrel)