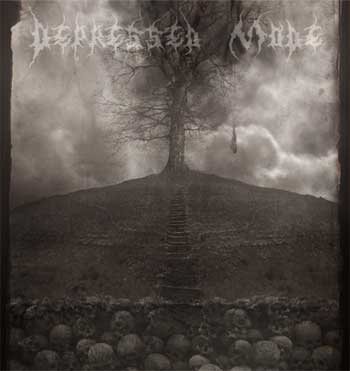 The majority of new bands nowadays ignore small things which make you special in one way or another as a band. For example, releasing bunch of limited demos and give the half of it to your friends is not the best way to promote your music and start building up a fan base, if that is your wish anyway. One of the first things you need to take care of is to have a good, simple, slightly unforgettable name. Already in that Depressed Mode has succeeded. But that is only one of the many things they do right. As the bandname is quite self-explanary we have a goth/doom/death piece of art here. Dark, cloudy, shaded; all the things you imagine by looking at the cover artwork are reflected in their music. The singing, done by both female and male vocalists, fits the music like a charm. Not different are the obscure symphonies, violins and piano chants of which “Ghosts of Devotion” is full of.

However, perfection will always be far away for any band. While the production is pretty decent, the drums sound way too modern, too controlled, almost like a midi-sample which is a shame because the playing itself is quite skillful. Also, the fact that the guitars are somewhat too far makes the album less doom as one could expect.

A big surprise is that “Dunkelheit” is actually a very appropriate cover. Depressed Mode fully played the song in their own way like they are the ones who have written it. And though it doesn’t have the magic the original has, it adds a higher value to the record which shouldn’t be missed by those who enjoy the atmospheric melodies of bands such as Draconian. For a debut, these Fins have done a hell of a job. (AlexJ)