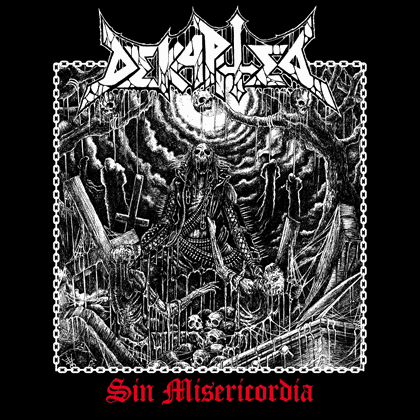 If a word is already taken by another band, you just corrupt the word a bit to make it your own. Bye bye Decapitated, hello Dekapited. Although “Dekapited” seems to mean “Decapitated” in Haitian Creole…Who said you can’t learn anything of a review on Extreme Metal? Dekapited from Chile are giving a short EP to the Thrash Metal community to let them know they are still alive after the release of their debut “Nacidos del odio” in 2015. The band on this EP is 75% different as 3 members left and only Camilo Pierattini (also involved with Invocation Spells) stayed in and recruited new blood. The Thrash metal on “Sin Misericordia” is 1980s influenced as you will hear some Slayer (first two albums, the end of the title track is even a little wink towards the instrumental beginning of “Hell Awaits”), Sadus / Merciless (The speed! The speed!), Sodom, typical gang shouts and that lovely drum fill sound of early Sepultura and Necrodeath. Ok, I agree…nothing original, but I think you’re reading the wrong fanzine if you are looking for something “original”. This is a 1980s Thrash job well done! (Ricardo)