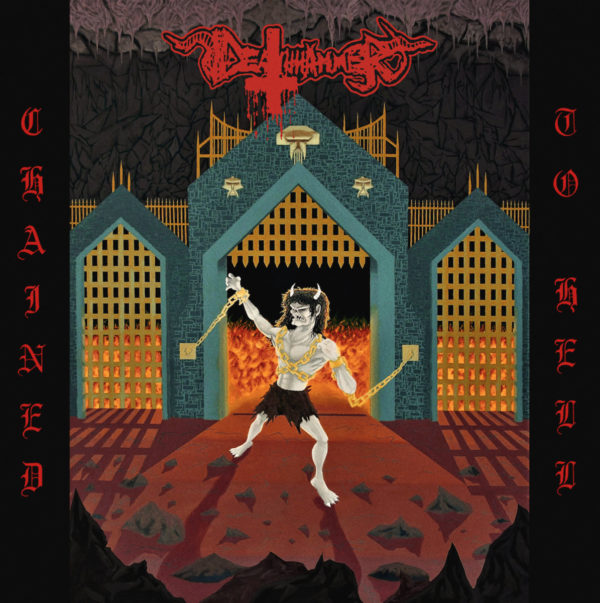 Do I have a pleasant surprise for fans of old school Thrash Metal with a speed , NWOBHM and demonical touch in it, seasoned with a portion of grim black metal! Especially fans of the old Kreator albums such as “Endless Pain”, “Pleasure to Kill”, …  old Sodom and the first footsteps of Slayer and Destruction, will get ecstatic about this one for sure. This band, named Deathhammer, with origin in Hamar – Norway, located near the biggest lake called Mjosa (yes, sometimes I also give away free geography lessons) released their fourth full-length which is another masterpiece! But enough with the random bullshit, this albums contains eight tracks with a duration of about 30 minutes, but hell, what an amazing music they offer in this short time.

The tracks are filled with unchained vocals, overwhelming drum parts and explosive guitar riffs. The furious and chaotic thrash metal won’t be everybody’s taste, but this duo (Sergeant Salsten and Sadomancer) are masters in this savage and rude style.  Track “Threshold of Doom” starts of with an overwhelming riff, and explodes into one speed orgasm with a mixture of sordid vocals, and screeching clean vocals. Also track “Tormentor” (nope, no cover) sounds aggressive  and vile and they make it sound so easy to create this style of metal. Instrumental track “Into the Burning Pentragram” is perhaps the outsiders on this release, cause this is the only song with clean guitars in it, also the crackling fire at the end adds something normal. This album “Chained to Hell” is in the line of their former ones, so if you’ve ever tasted their music before, you know what’s coming. Last but not least: the album cover could easily be stolen from some game developed in the 80’s, begin 90’s don’t you think?. Perhaps you’ll find the courage to enter the realm of hell? I dare you! (Fredde)