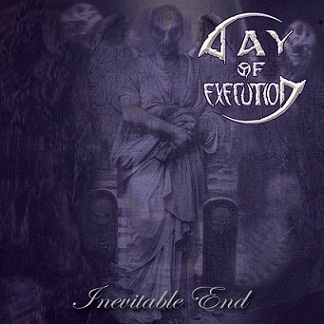 After the impressive debut “Dead Burning To Ashes” from 2012 and the “Pointless Cause” EP from 2013, the Bulgarian Death Metal machine Day of Execution is again smashing skulls and bones with their second full-length audio blast “Inevitable End” released by the German label Neckbreaker Records. Prepare yourself for nine tracks (plus intro) of first quality oldschool Death Metal played by very skilled musicians. The first thing that should be mentioned is the production which is on a very good level – the sound is powerful and every instrument can be clearly heard. And then comes the music in “Inevitable End” which is – guess what – on a very good level either. The mix of solid rhythm section (Plamen Petkov – drums and Momchil Karamichev – bass), heavy and memorable guitar riffs (Ivaylo Gradev – guitars and Ivaylo Mladenov – guitars) and the evil deep growls of Svetoslav Vasilev has created one very strong and dark Death Metal record. There are fast neck-breakers like “The Beast of War” and “The Final Gift”, there are also more melodic passages like on the title track “Inevitable End”. There is no point in analysing all of the songs because honestly, they all are bloody good!  The album’s finale comes with “Back to One” – a crushing cover of an Obituary classic.  If Death Metal is what turns you on then Day of Execution is a band that you should look for immediately. “Inevitable End” is a very strong release and if you wish to support one high-quality underground band then waste no more time and purchase this album from Neckbreaker Records because there are only 500 copies printed!  (Zvetan)