Darkness Eternal – Dawn of the Suffering 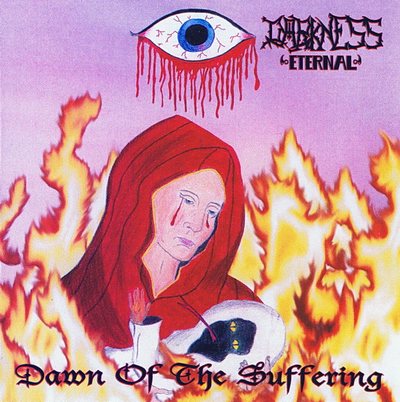 I still can’t figure whether to like this album or not. On one hand it all sounds pretty tight and powerful, on the other hand the sound quality is not well be any means and there’s some kind of ingredient that’s really bothering me. I can’t really point out the thing that’s annoying me, but every time I listen to this album I just can’t get convinced. Ofcourse that’s my opinion and it’s very probable that any other one of you has got a totally different view on this album. “Dawn of the Suffering” is filled with a couple of fast and aggressive death-metal songs, yet there are also a lot of more melodic death/black songs in the album. Most of the lyrics deal about the death of Christ and the awakening of hell and maybe that’s the thing that’s bothering me. Not that I’m some kind of religious fuckface, but it seems that almost every American death/black band has the same kind of lyrical content. On the musical side of Darkness Eternal everything sounds all right and I guess that we will hear more from this band in the future. The one remarkable thing about Darkness Eternal is that just 1 person is playing all instruments!! Seeing last mentioned fact I have to say that I show some respect for this one-man-army. (Markabre)