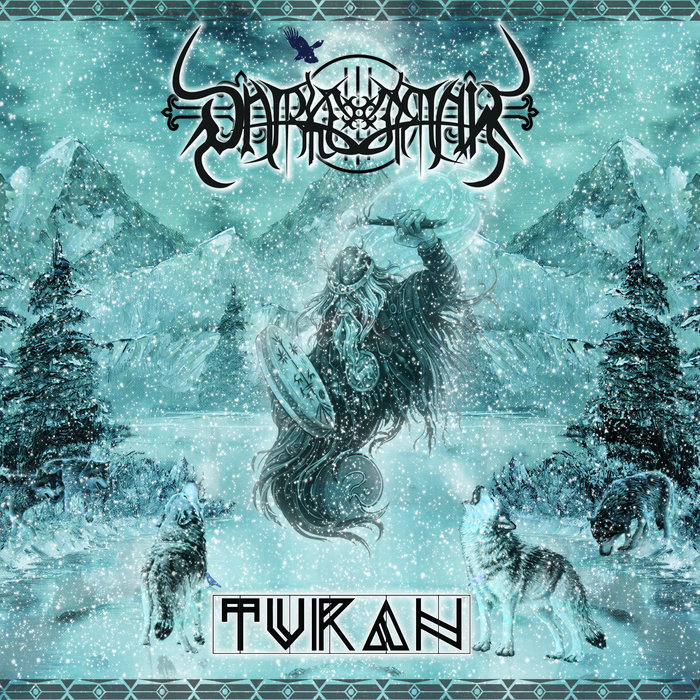 The previous release, “Manas” (or “Манас”) received a very positive review from yours truly, as I am just a sucker for this kind of Black Metal. Atmospheric, different layers, hypnotizing riffs and melodies, melancholic…it keeps on being interesting, even after a spin of 50. Sure one prefers one release above the other, but when it concerns Darkestrah, I’m easily pleased with all their previous art. Before the writing of “Turan” began, the news spread that Kriegtalith left the band and got replaced by Merkith, a German vocalist who gained some experience in a couple of underground bands, but nothing worth mentioning. So frankly, a vocalist with a distinctive voice left..is the new one able to fill her shoes? Well, yes and no, as Merkith does it his way. Kriegtalith wasn’t a great vocalist or the main reason which make Darkestrah interesting, but she did have a recognizable voice. Merkith’s vocals is in the vein of Kriegtalith but, and not surprisingly, more manly. But therefore also a bit more common. Enough about the vocals as the Black Metal is a bit different as well. It’s less “icy” and raw and bit more melancholic as the emphasis is more on the epic part. For example on “Bird of Prey” you hear a returning drum pattern which has similarities with Hades Almighty’s “Awakening of Kings” and “Conversations of the Seer” is quite Primordial-like. I’m totally ok with it, but if you like the Darkestrah who played their material more raw and up-tempo, it could be you’re slightly disappointed. But everything is 100% Darkestrah as all is still combined with traditional folk instruments, violins etc.. At the end, “Turan” is a new chapter without Kriegtalith, but Darkestrah remains a highly interesting act which hasn’t bore me for one second yet. (Ricardo)