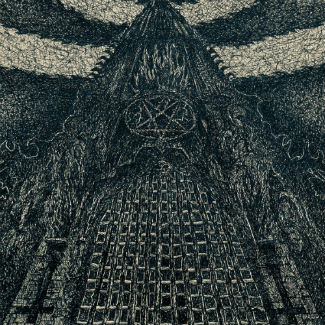 Daeva, a Black/Thrash combo from Philadelphia (USA), released this EP in 2017 at first, only given it a k7 and vinyl treatment by Headsplit Records and 20 Buck Spin. This time Martyrdoom Productions stepped in to give this EP a CD release as well. So, what to expect from a fairy new formed band filled with members who have experience with acts like Crypt Sermon, Trenchrot, Horrendous and Coffin Dust?

Well, fair to say they are influenced by the first wave Black Metal along with the Teutonic Thrash scene and are intoxicated with the raising the middle finger high-attitude combined with speed only with a less gritty production. “Pulsing Dark Absorptions” will be a fest of recognition when you enjoy Sodom, Aura Noir, Venom (give “No Effective Banishings” a listen, quite some Cronos vocal lines), Deströyer 666 (especially “Unchain the Wolves”) and Nifelheim. But as said before, just a little bit less sloppy and gritty. Anything more to say? Well, the EP ends with a well-played cover of Mayhem’s “Deathcrush”.

Although this EP is good, well-played and does provide everything you may expect from a Black/Thrash band with the attitude they have, I can’t say it is fuckin’ special or something like that, therefore it misses the last punch. But who knows, with their next release…? (Ricardo)