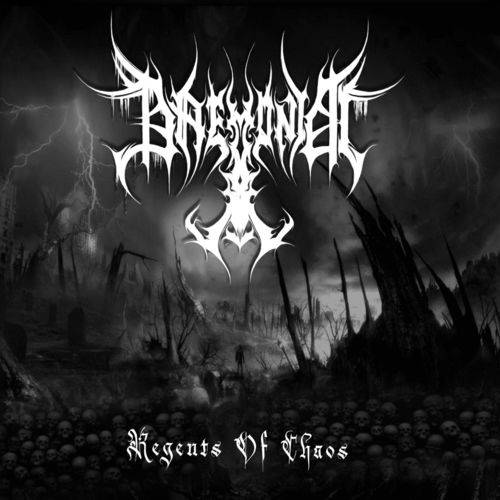 Colombian Black Metal band Daemoniac are one of the latest signees on the Tribulación Productions’ roster. Tribulación Productions is one of the most important and established labels in the extreme Colombian metal scene. Founded in 1990, as well as being a true pioneer in molding and painstakingly forging the contemporary Colombian metal scene in what it is today. Most of its releases have a total cult status for collectors.

“Regents Of Chaos” embarks with one the most epic and celestial intros I have heard in a long, long time. Choirs, tympani, esoteric and chilling orchestral arrangements that would make a band like Limbonic Art jealous.

But all of this seemingly heavenly bliss is brutally torn to shreds as the second (title) track starts: corrosive and menacing guitar riffs, dual demonic vocals, backed up by a Gatling gun blast beat drumming, manifest themselves in all their satanic glory. A dense wall of tremolo picked fills and punishing riffs raises itself while the blasphemous incantations emerge from the ninth circle of hell. This four-piece band has no less than two lead vocalists and a backing vocalist. Both of them vomit their bile and sacrilegious filth in perfect combination and synergy.

Musically, Daemoniac hammers down frost bitten Black Metal, partially influenced by the Scandinavian scene of the 1990-ies. You can feel this uneasy, creepy brooding tension throughout all the songs. There is also room for midpaced bridges, mostly made of satanic chanting, or additional dark choirs.

The combination of dual vocals: shrieking and screaming high pitched banshee cries and low devilish tones works perfectly and in symbiosis, pushing the level of frenzy and hallucinatory effects to a climax, without becoming too theatrical and ludicrous like Cradle Of Filth manages to do these days.

As said before: the second wave of BM influences are a noticeable influence in Daemoniac ‘s music, coupled to the scorching insanity of typical Colombian Black Metal. And it sounds quite authentic. Lyric-wise it’s all satanism, anti-christian smut and dark ritualistic black mass antics of the nastiest kind.

The songs sound very dynamic, containing a myriad of variety and propelled relentlessly by a rabid pounding rhythm section. The production on “Regents Of chaos” is also far above average – not only does it sound organic, but also quite modern, using all the advantages of modern digital recording technology. Trauma and catharsis – the final song ends with a fragment of celestial symphony, before everything turns dark.

Colombian Black Metal are a league of their own. Mostly over the top and always aiming for maximum carnage and damaged speakers. I found myself grasping for air during this maelstrom of satanic insanity. Not an inch is given by Daemoniac: they go for the throat with a blunt machete. Far from being commercial and totally brilliant because of the creative use of dual vocals, “Regents Of Chaos” is therefore a perfect description of Daemoniac’s pandemonium.

Those who are not acquainted with Colombian Black Metal and their provocative razor sharp style,  google yourself to the Tribulación Productions’ website and ask for a catalogue.

… I need a break … and a stiff drink after being exposed to this madness. The album comes in a beautiful gatefold digipak and is limited to a mere 300 copies I believe.

Get a copy while you still can and listen to a sample from Daemoniac on YouTube. You’ll be drawn to the Dark. (LV)