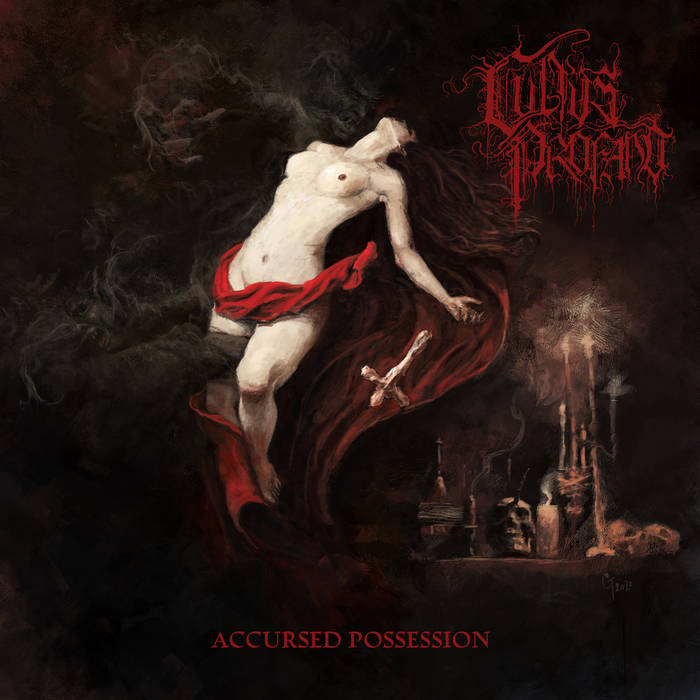 Strzyga’s vocal presence is even more captivating and aggressive, some real demonic shrieks that will haunt you day and night! The riffing is once again a well-balanced mixture of aggression, atmosphere, variety and catchiness. Advorsus vocals add another, deeper demonic element to provide another facette and his drumming is tight, powerful, skilful and song oriented.

The atmospheric amount of riffing, vibe-oriented vocals and drumming are highly present on the album, like in “Devoted To The Black Horns”, which thanks to its occasional eruptions gains quality and keeps to be interesting for the entire 9 minutes. Afterwards you probably will shred a bible and eat it, because “Upon a Tomb of Sacrilege” starts furious and vigorous with a killer riff, one of those you wish to have written by yourself. The song goes into similar atmospheric territory like the previous tracks, with more adrenaline and fire!

“Within a Coven of Shadows” the duo wrote a very entrancing track that has a warm and lovely atmosphere, like bathing in the moonlight and performing sex magick. Nice blasting towards the end! “Crown of Hellfire” crowns (did you see that coming?) the record at the end with another batch of killer riffs, pushing drums with double bass galloping and blast mastery, a track to bang your head to. You can feel that hell has been opened and the torment will continue. The trance like feeling they created on the first record was enhanced once more on “Accursed Possession” and shows a slight progression in that department. I am curious to see what will be on the next record.

Besides the killer production (well balanced, nice bass presence), the record is blessed with a killer artwork by Khaos Diktator Design who perfectly captured the essence of the record.

Cultus Profano made another important step forwards with “Accursed Possession”, writing beautiful Black Metal which has the right feel, the right dose of violence and the beauty that is often connected with this dark genre. Well done! A tour in Europe would be nice! (DPF)