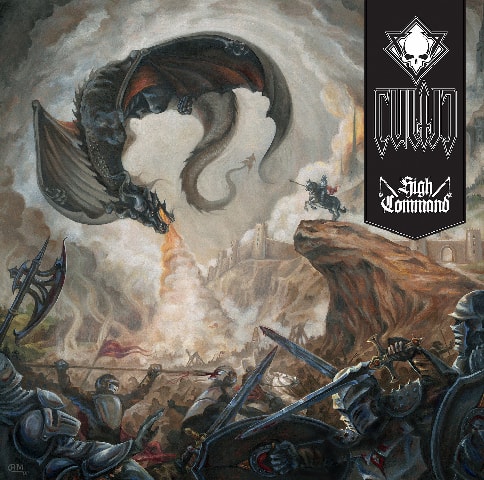 Imagine being lost in the maze of the minotaur, being stalked by the raging beast, closer and closer until you feel its hot fetid breathe on the back of your neck OR being on the battlefield covered in blood and dirt, bodies piled high around you, as the dragon screams away your final thoughts of fear.

These are the moments of raw energy and power that Cultic mold into a bottomless pit of Death/Doom on their debut album “High Command”. This album has some of the lowest, swamp stirring, gut churning sound and production I’ve heard in a long while. The liner notes say their is a guitar in the mix somewhere but honestly this one sounds like drums and bass right out of the bowels of hell.

Musically, Cultic sit somewhere between first wave of Doom metal and late 80’s Death metal, it’s a blend that only works because of the simplicity and just pure nasty head punching bottom end of the riffs. By the way, these riffs are gonna get stuck in your head, Cultic have crafted some punchy and catchy riffs and thrown them down the chasm of all that is unholy. Now some parts are fairly repetitive due to the simplicity of the song writing but in all honesty, this style of doom doesn’t need to get complicated to get your attention and the album doesn’t drone on too long to become boring. I even hear some guitar influence in here coming from Italian metal bands like Death SS or Bulldozer. The vocals are reminiscent of Tom G. Warrior during the Hellhammer days, the howls and grunts are nasty and punctuate the grit and gristle of the low end sound.

As you may have guessed from the cover artwork, the lyrical themes on the album are about medieval era fantasy and war, I am sure picturing an army of orcs marking in step to the crushing dirge of Cultic wouldn’t be out of place either. If you like rough, dirty, grit filled swamp production and catchy fist pumping medieval riffs, then “High Command” is an album just waiting for you. (Ted Gloom)