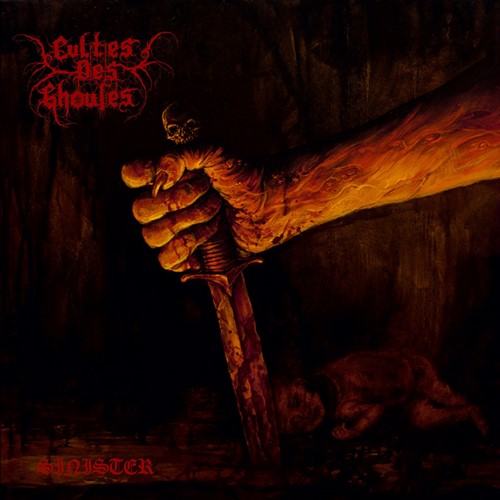 The priests of black magick are back with a doomy 5 track black mass of almost one hour length, to teach you the secrets of the sinister path. “Sinister” is the new opus which in its atmosphere is a bit more like “Henbane”, paired with the theatralic edge of “Coven, or Evil ways instead of Love“. Mark of the Devil uses his entire vocal spectrum once again and cements his talent as one of the most inspiring vocalists in recent years. The riffs are top notch vintage Doom/Black/Thrash chainsaw orgies provided by Machine and underlined by the tasty basslines played by Minski. W. Earl bashes his drumset when necessary with d-beats, old school blast and back beats as well as powerfull slow motion orchestrator with a good sense for appropriate drumming. He knows how and where to put the strokes to make the songs great without putting too much in.

The songs are almost reduced to the minimum of changes, which gives them a vintage/archaic feeling I really like, “Vintage Black Magic” on “Henbane” is still the best example for it,  but enough to keep the songs interesting. The entire production is perfect for this type of ritual no doubt. The manic vocals from previous works and guest contributions are a bit less than maybe expected but none the less killer. The use of organsounds used here and there are phenomenal and a great homage to old heroes. This one comes very close to be their best work (“Henbane”  is hard to top) but only time will tell If so, and instead of talking too much, better listen to yourselves and enjoy the treading of the darker paths. (DPF)