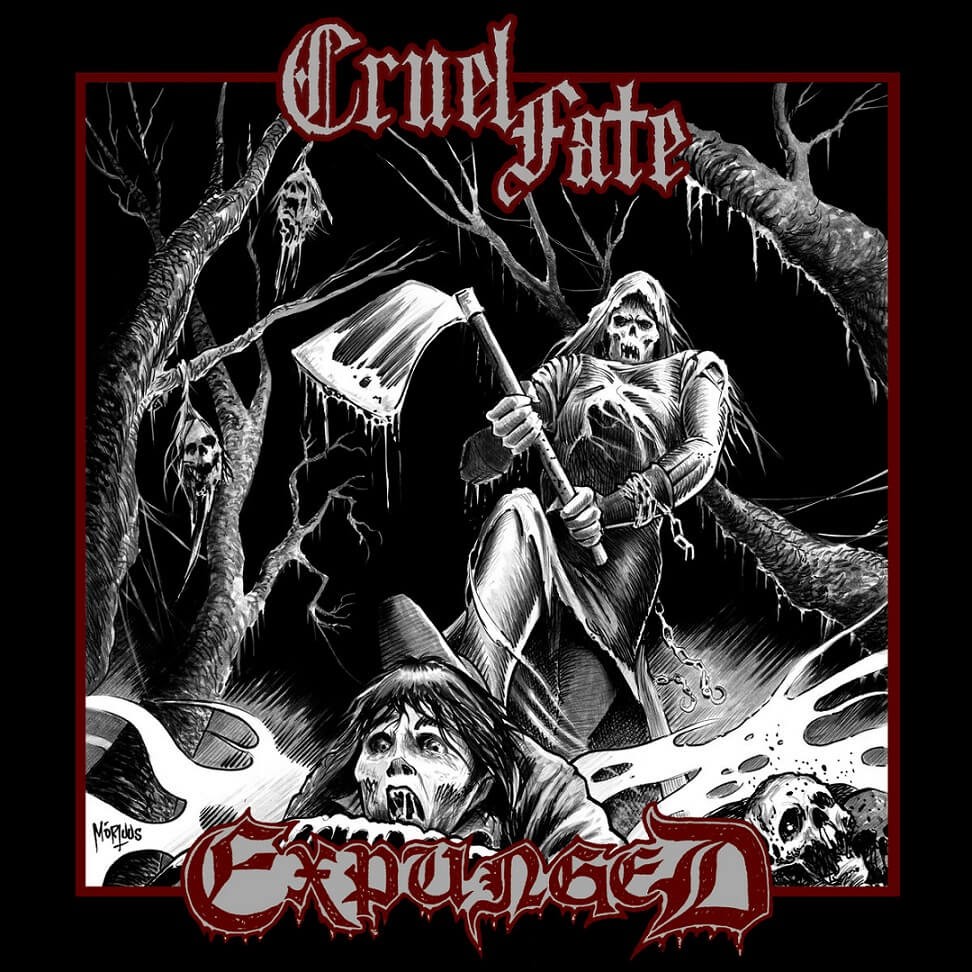 CDN Records have put out a very interesting split release between two Canadian Death Bands, Ottawa’s Expunged and Quebec’s Cruel Fate. The split has been put out on both CD and cassette and features some compelling grisly artwork, as well as five tracks from Expunged and four tracks for the Quebecois.

We start things off with the powerful double kick punishing drums and meaty guitar leads of Expunged which soon drop into a steady rhythm as  interspersed with slower, groovier sections and all accompanied by audible, sinister growled vocal work. Opening track ‘Plague Within A Plague’ has a rampant guitar sound and a chorus that sticks in your head from the moment you hear it. Some technical sounding guitar solos add even more flavour to this opening salvo before leading into faster and more brutal territories such as ‘Nuclear Grave’. I don’t often come across anguished Death Metal vocals and yet they fit the desperate, apocalyptic and in parts Death/Thrash feel to this track superbly well, and their old school Speed Metal approach and aesthetic also really hits the spot. I like that Expunged keep you guessing as they pack each of their five tracks with various sounds and influences, such as the chug heavy rumble of ‘Saviours of Sickness’ and the slower in tempo but heavier in brutality and furious rumbling bass play of ‘Condemned to Be’. I expected nothing less from this awesome band but they deliver it anyway, ‘One Last Breath’ rounds out their side of the split in rampaging fashion with the drumming in particular furiously sounding out in a wall of skin and symbol clashes that could hark the end of all things. Seriously groove laden guitar leads in this one too that sound phenomenally evil! Cruel Fate have a hard act to follow…

And opening the Cruel Fate portion of the split is ‘Mugitus’ which shows dominant intent from the very first note with a mid-paced, grinding guitar lead heavy bout of bleak Death Metal savagery complete with a far more intensive growling vocal style than the previous band and a drumming style that is tight, and punishing. Cruel Fate have a far more gore laden concept behind them and the sickening audio samples of blood spewing and flesh tearing only adds to the macabre atmosphere already created by the bands ravenous music. ‘Abyss Inverted’ scales back the creepy atmospherics and instead focuses on fast paced bludgeoning from the drums and a more feral sound from the guitars, though a little interlude of the bleaker guitar leads and intensive rhythms is most welcome also. Just like Expunged, Cruel Fate pack their tracks with many influences and the Death ‘n’ Roll feel to ‘Momentous Skies Are Born’, mixed with slower Buzzsaw riffs adds another layer to this already stacked Death Metal release.

A brilliant split album from start to finish featuring two fine Canadian Death Metal bands who go hammer and tongue, balls to the wall to outdo each other, and the end result if brutal, engaging and an experience that all fans of Death Metal must have! (Luke Hayhurst)