Crucifier – Thy Sulfur Throne on High 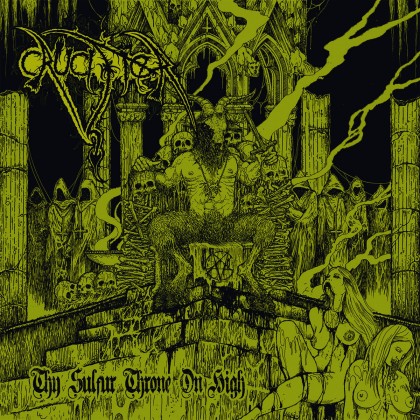 Cazz Grant, also known as The Black Lourde of Crucifixion, started Crucifier, almost 30 years ago, to have his own entity to spawn blasphemy and execration upon our rotten society. With lots of line-up changes, Cazz serving other bands with his talents (like Decieverion, Grand Belial’s Key and Masada) during Crucifier’s existence and a couple of demos, splits, compilations and the debut full-length “Stronger than Passing Time” (released in 2003 by Death to Mankind), mr. Grant returns with the second full-length after 15 years.

“Thy Sulfur Throne on High” is everything you can expect of a band that stays true to the roots of end 80s and early 90s concerning Extreme Metal. A sound and production capturing a haunting and dark atmosphere grabbing influences from the Death, Doom and Black scene of those days. With the variation up-tempo riffs along as well as doomy passages, the howling leads and the devilish growls, Crucifier managed to create some nasty old school satanic Death Metal that will appeal enthusiasts who are into acts like early Acheron, Headhunter D.C., Incantation and Imprecation…this album deserves your attention. (Ricardo)