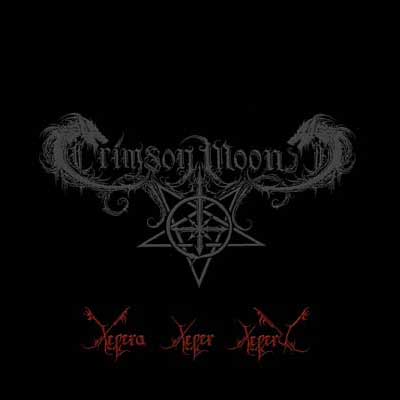 “I invoke the presence of the Vampire Gods!!”, intones Scorpios on “Intro- Dirge of the Apocalypse”. Alright, you’ve found us. What do you want? Ah, for us to turn our attention to the rather nice package Deathgasm Records have put together for Crimson Moon fans. OK then. After all, it’s not often you get to hear a debut from a band practically no one has heard of, despite the fact they formed in 1994. And that’s what is on offer here- “Xepera Xeper Xeperu” comprises two discs- a new recording under the title “Serpent Beneath the Skin”, and the band’s long out-of-print 1996 opus, “To Embrace the Vampyric Blood”.

“…Vampyric Blood” gives a strong impression of what Crimson Moon were like ‘back in the day’, and suggests that they deserved to draw more acclaim. The recording quality is poor, with the guitars especially tending to commit suicide by drowning, but the general feel of the album wins through. A predilection for slightly cheesy pomposity is clear immediately in the spoken word of the intro, and the horrible Hammond-style keys of “Carpe Noctem”, but overall Crimson Moon prove themselves adept at mixing up thundering guitar work, evocative at times of a contemporary Satyricon, and huge keyboard atmospheres, symphonic in a more mystical, epic way than the acts who followed them. Sure, it’s dated, but I think a many fans of modern melodic and symphonic black metal would surprise themselves by getting a kick out of interesting tracks such as “The Stormbringer”, “Sender of Nocturnal Visions” and “Praised be the Blood of the Serpent”.

“Serpent Beneath the Skin” opens with an instrumental track with the potential to be every bit as majestic as those Dimmu Borgir put onto “Puritanical Spiritual Misanthropia”, but it is bitten off quickly to make way for the showcase of Crimson Moon’s new style- a faster, more raw, more vicious black metal racket with plenty of distortion, but a retained sense of aura which borrows quite a lot from the aforementioned Dimmu. Not original by any stretch of the imagination, and still not with the best production values, but definitely proving that this band- who each have long pedigrees- can still produce interesting, hateful and catchy sounds over a decade on. This surely means that this package, which will be adored by long-term fans, is a success on all fronts. (SKF)