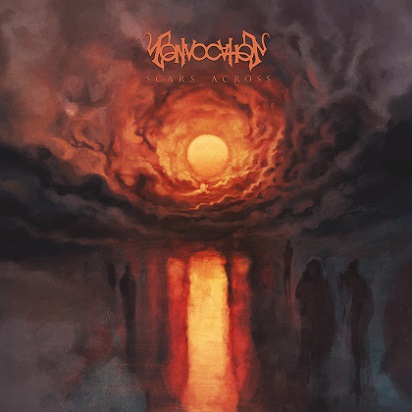 Sometimes, I can spend hours, if not days, to find new music. Sometimes, I’m way to lazy to do so. And sometimes, new music finds me. If I find something I like, I’ll try to listen to other projects by band members, to see (hear) if there’s a particular sound they create, which sets them apart from the rest, makes them recognizable in a puddle of similar sounding bands / projects. And for some reason, I have huge difficulties in setting apart bands who play along the lines of doom.

But some bands just differ from the rest, but you can’t really put your finger on what that thing that makes them so different is. For me, one of those bands are Convocation from Finland, who released their debut, “Scars Across” in the spring of 2018. To some extent, they could be considered a supergroup, since both members have already built their reputation in other projects – MN is the current vocalist of Dark Buddha Rising and LL is the mastermind behind Desolate Shrine amongst others.

Scars Across is a beautiful combination of atmospheric Death Metal and epic Funeral Doom combined with strong emotions which will leave you questioning your own existence (the way it should be). Wide spectrum of vocals, which range from the death metal growls across shrieks of misery into occasional cleans (very few, but especially noteworthy), powerful riffing, thunderous bass and dense drums together build that special cavernous, creepy sound. To make the whole sound even more sinister, there are piano parts, some chanting and that organ sound which could be played in an old horror movie.

Interesting release, filled with many different sounds which form a recognizable monolith within Death / Doom bands. Since there re only 4 songs in just over 50 minutes, this album is not for the impatient ones. If you’re a fan of Doom (in many different styles), you should love it, but if you’re only getting started here, don’t start with this one. It will drain you emotionally and set your standards too high for the albums to come. (Black Mary)