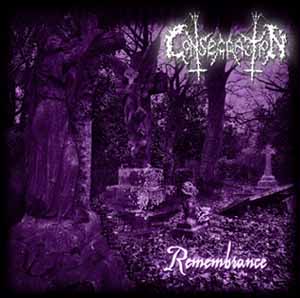 It is no surprise to hear that England has many great Oldschool Death Metal bands, including some unforgettable names. And Consecration is no exception to that rule. They add a major dose of Doom Metal to their music as well, just like some of the country’s essentials of the early 90s. The frame of this album (compilation, if you will) is built with solid walls of massive guitar riffs. Although the sound is relatively clear, it doesn’t take away any of the Oldschool Death Metal feeling. Then again, this band is not that old. This release contains the whole discography of the band, a total of 18 tracks. Obviously there is a slight change of sound between the album and the demos, but overall it’s fairly consistent. Although the sound and style doesn’t change much throughout this release, it still invokes some different kind of feelings. Some of the tracks sound more sinister while some others have much more melancholic lead guitar parts, reminiscent of earlier British Doom/Death Metal bands. That’s the point of this kind of Doom Metal: sounds of both horror and despair.

The main downfall of this album is that it can get a little repetitive, even though that’s usually the case with Doom-influenced bands. I guess one band pulls it off better than the other and it’s a better of personal mood and interpretation. Overall it’s still a solid release. The overall structure of most tracks is similar: a semi-acoustic sounding intro followed by colossal riffs as earlier described. Although this is a good set-up, the overly consistent use can make it sound repetitive. There are also quite a lot of tracks more than 10 minutes long. Long songs can be very interesting but can sometimes drag too much.Everything seems well put together though; the riffs, the leads, the atmosphere and even the name of the band. The vocals are quite deep and guttural, but not to the point where it loses its character. Bands like this prove that the metal scene is alive and well, recently formed bands still know how to do it. (Jelmer)