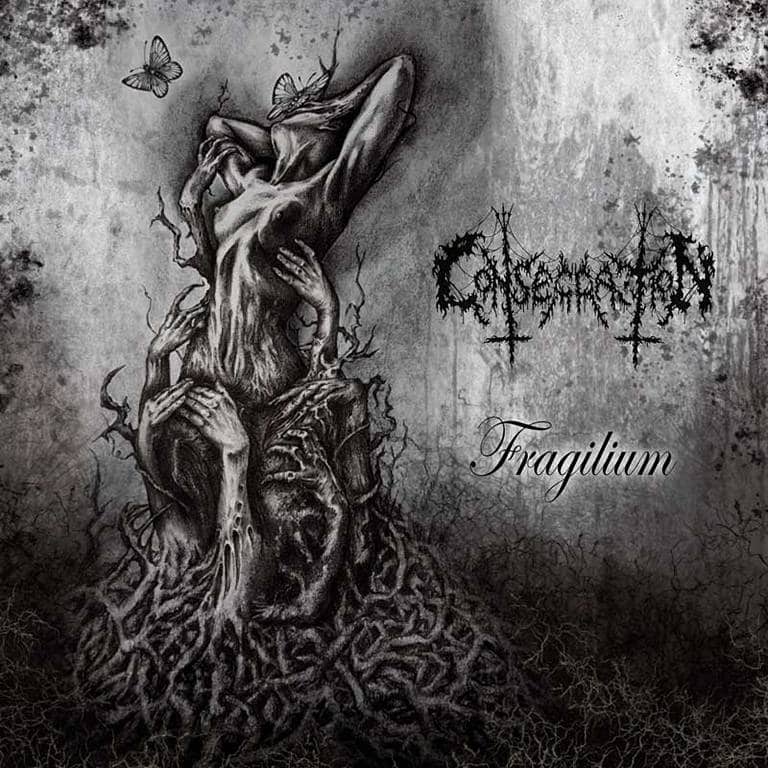 UK-based doom band Consecration’s 2019 release “Fragilium” is five tracks long, but in true doom form, clocks in at almost an hour: most of tracks are over ten minutes long. The album starts slow, rhythmic and airy, focusing on guitar lines with the occasional church bell chime. The album progresses to faster moving riffs, and while decidedly doom, it borrows from black metal with a pared down and raw sound that overall serves the album well for the most part. The album features deep growling vocals, and the occasional goth-rock sounding riff is an intriguing addition. “Fragilium” as a whole has a cohesive sound; the tracks flow well into each other. Though they’re similar, it is not necessarily repetitive. The final track, “To Welcome The Grey,” is probably the album highlight: mysterious and interesting guitar rhythms which at almost halfway through is reminiscent of the moment in Blue Oyster Cult’s “Don’t Fear The Reaper” as the song transitions to the stripped down waltzy guitar line.

Overall Consecration heavily utilizes drawn-out intros to their tracks, for better or worse. I’m a lover of doom, but some iterations are too much for me — I booked it out of a Bell Witch gig a couple of years ago after feeling anxious and claustrophobic from the extremely slow moving progressions. Plenty of other folks find that compelling, so that’s up for you to decide. Personally, I could do with less intro work. That said, even with a shorter intro the songs would still be fairly long, but they are well composed in that they continue the musical thought well, and remain entertaining and interesting even at long length. That can be hard to do, and often one hears a band stick with a riff over and over which is ultimately detrimental to a song, even if the riff is cool. Consecration has struck a fairly good balance here.

In my personal listening experience, I find that the more heavily produced an album is, the less I tend to enjoy it. Consecration’s sound has black metal influence, thusly benefiting to a degree from a less produced and raw sound. However, I actually think this sound would flourish with just a touch more production, or maybe more intentional mixing. The drums sound off — sometimes too loud while still sounding weak, tinny, or lacking depth. They lack a certain presence. I would be curious to hear if a more balanced sound brought more of the mood to the forefront.

Though not their first release, “Fragilium” is a great spot for a doom band with some edge to them. I will be curious to hear the next steps for Consecration. (Maxine)