Concilium – The Oblivion of Time in the Dim Light 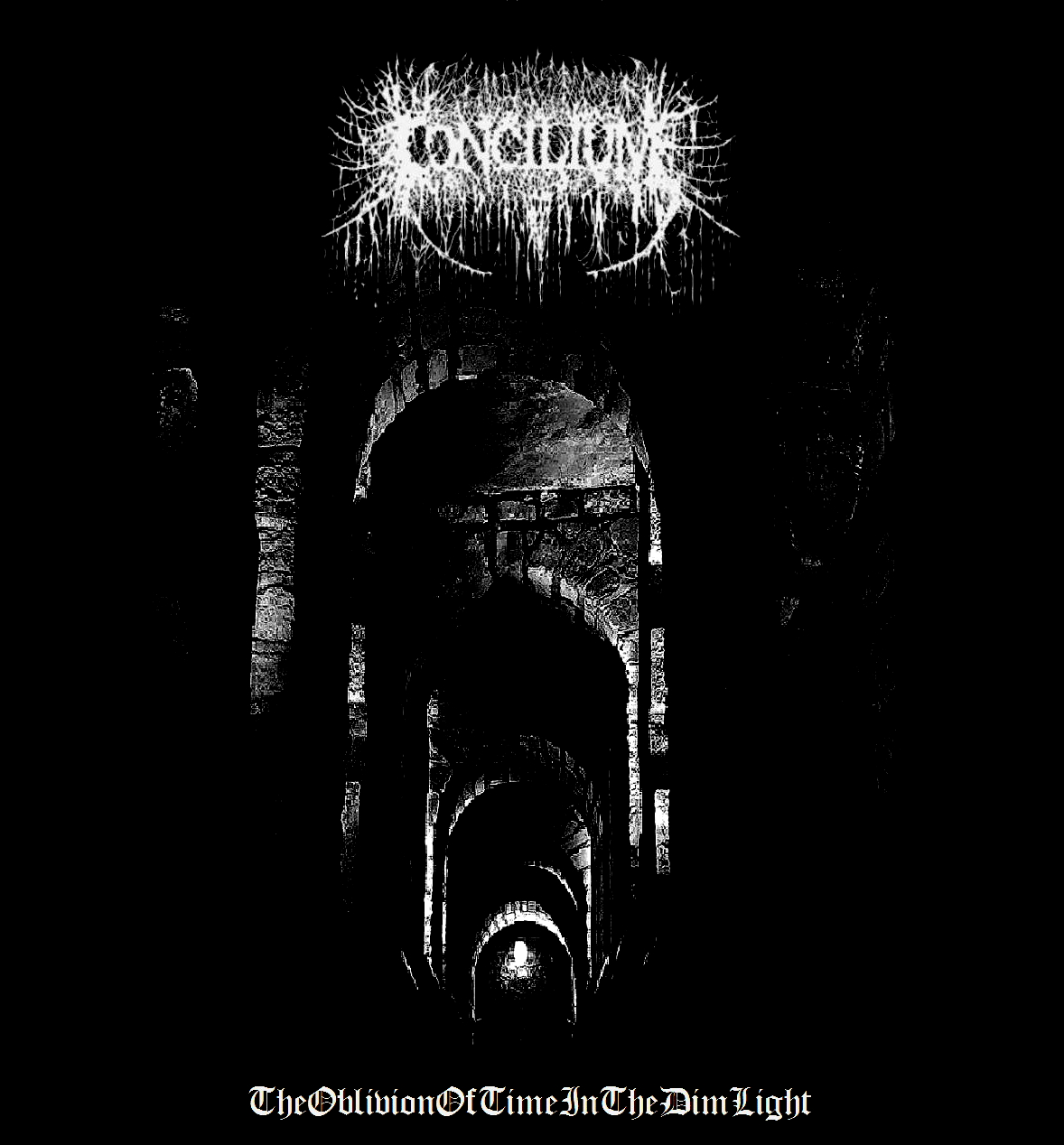 Concilium is what seems to be a newly conceived mysterious Black Metal project from Portugal, involving members of Necrobode and Summon. The album is divided into four long segments or rituals : “Glimpse Of Passing”, “Catacomb Churches”, “Ancient Below Cemeteries” and “Passageways For Burial”.

What starts off with a few sad and depressive guitar chords, a haunting reverb and ominous chimes, creating a rather gloomy, misanthropic and barren soundscape suddenly bursts open into a volcanic eruption of churning guitars, drowned in even more reverb, echoing into darkness and brutal blast beats. And slowly…the vortex opens.

These blast beats seem to be the only thing you can clutch onto, as all the rest explodes into a vortex of dark, atmospheric sounds, pulsating harder and harder, one soundscape getting absorbed by another. The music on itself is concentric, meaning it emanates from the same centre or axis. Amidst all this acoustic barrage of swirling guitars, ghostly voices try to escape from the vortex. Echoes of tormented souls, arcane incantations from a time before mankind existed. Whatever they are, they’re anything but human.

The musical foundation of Concilium is clearly Black/Death, however mutated horribly into undefined soundscapes of darkness, chaos and ritualistic insanity. This is not just some freaky experiment of bored musicians goofing around in a studio. No: there’s a well-conceived structure and meaning behind all this. And rest assured: Concilium are far from boring. Each track flows over into another and is different in nature. The brutal drumming acting as a catalyst for all these musical eruptions. This album is a mind shattering experience. The more you listen to it, the more it absorbs you. Time and space seem to collide, human senses are numbed and overwhelmed by this aural nightmare. You’ll find yourself completely detached from the mortal world. Concilium are hard to pin down : the vast wall of sound reminds of Grave Upheaval, the echoing drone of Sunno ))), the ritualistic devil worship of Xarzebaal, although it isn’t quite the same. Concilium are despite everything more organic, more elusive and more bestial. What comes closest would be Black Cilice or Candelabrum in my honest opinion.

“The Oblivion Of Time In The Dim Light” is nothing short of being a true masterpiece. The ultimate soundtrack to the nether regions of darkness and evil. Putrid Cult Records really have outdone themselves with this one. Musical extremists, noise mongers and those who are into sensory abuse, genre Black Cilice don’t have to hesitate for a second.

Personally I recommend that you listen to this album in complete darkness. And please don’t play it in the presence of pregnant women, priests or mental patients. Now …. where’s my Valium? (LV)