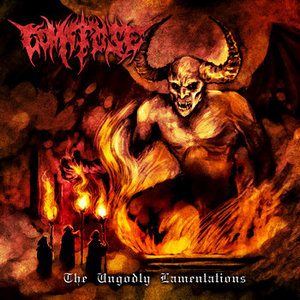 Brutal Death Metal and Asia, it seems the combination is alive and kickin’ still. This time it is Comatose from the Philippines who will display their anti-religious US Death Metal driven brutality. The kind of brutality these guys are producing since 2004 and have resulted in a couple of demos, EPs and a debut full-length called “The Ultimate Revenge”.

I can be clear from the beginning, “The Ungodly Lamentations” is a logical follow-up of the debut, it just goes on with Deicide / Morbid Angel riffs, Trey Azagthoth howling solos and Glen Benton (dual) vocal approaches and lines. You definitely hear what they are trying to accomplish, but many bands have done it before, and to be honest…have done it better. Back to the drawing board. (Ricardo)