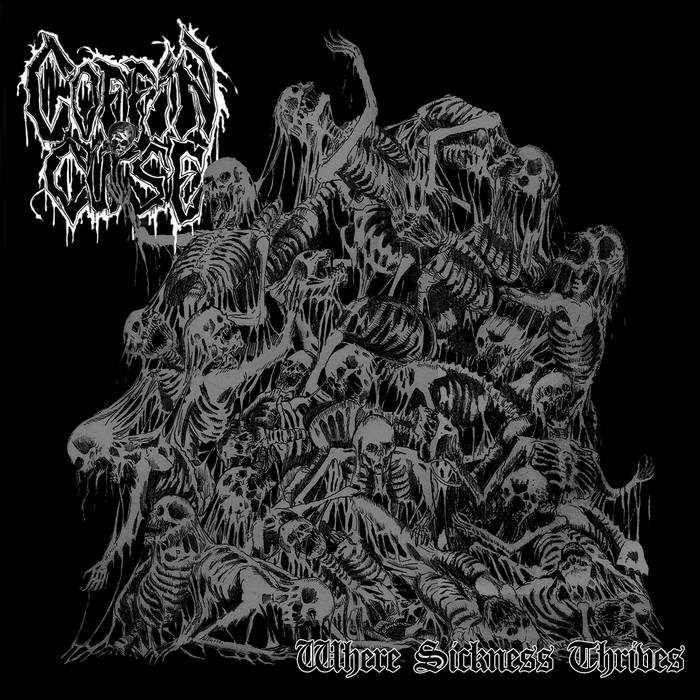 After a demo, a couple of EPs and a split with Vomit Scum, Coffin Curse from Chile teases us with a single prior to their upcoming debut album “Ceased to Be”. Although mentioned Machalia Records have released this single on CD, limited that is, I couldn’t find any proof this actually happened. Fortunately the band themselves released it digitally as well.

This 2 track single contains “Where Sickness Thrives”, which also can be found on “Ceased to Be”, as well as a cover version of Mayhem’s classic “Freezing Moon”. “Where Sickness Thrives” is a feast for every Old School Death Metal fan out there, as they are standing with two feet in the old US OSDM scene concerning riffs, the variation in pace, the use of different growls and leads.

“When it’s cold…And when it’s dark…The Freezing Moon can obsess you! The “Freezing Moon” cover starts with the infamous words Dead vomited on stage in Leipzig once. The cover itself is well done executed, so let’s call it a nice addition.

This single is something for the collector of course, if the collector consider a digital collection as a collection as well. Otherwise keep an eye on the CD version, maybe it is released after all. But be sure not to miss out “Ceased to Be”! (Ricardo)