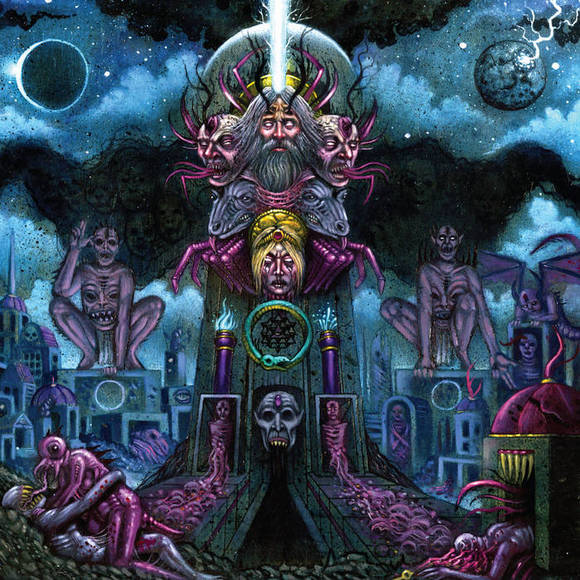 For all those out there that are interested in this type of thing, a Cleric is basically a member of the Clergy, you know, those God bothering types that certainly disdain the kind of music you are here to read about, or in certain fantasy type games more of a kind of warrior priest that not only heals the wounded, but likes to bash in the skulls of their enemies with big heavy blunt instruments like, let us say for example a mace or a Warhammer. I am going to run with the idea that our Texan based friends here probably named themselves after the second example provided. You will no doubt understand why after listening to their music.

Having said that, I’d heard the name Cleric being bandied about more than once over the last couple of years, but always somehow never seemed to get around to having a listen, so when my good friend Ricardo asked me if I’d like to have a shot at reviewing their latest effort, “Serpent Psalms”, I said to myself, “Self, why the bloody hell not”, and believe it or not, here we are. Six years after the release of their debut album “Gratum Inferno”, Cleric are back. The obvious question apart from why they took so long between releases (more than likely due to the way life gets in the way of everything), is the question, is it any good?

Well, for me Cleric pretty have the whole Death Metal thing that I thrive on pretty much nailed right here. You get all the things you love, and opener, “Maw of Absolution” will clearly shove it right down your throat with a gauntlet made of the heaviest of metals. From the rolling riffery to the blasting drums and guttural vocals (well, duh, it’s Death Metal innit?), these Texans aren’t trying to be anything other than what they are. A giant blunt instrument of warfare designed to batter everything in their path into some kind of mushy, bloody paste.

Of course with any band of their ilk comparisons will be drawn, I hear some Bolt Thrower (mind you I hear the mighty BT in a lot of things these days thus was their influence), A dash of Asphyx, some Hail of Bullets, all in my own opinion of course, many others, but mostly what I hear is excellence. These fuckers put the D into Death Metal with a ton of swagger, and a suit of full plate armour that is almost impossible to penetrate. Fuck you and your puny riffs they say to all others, cop some of THIS shit! Take “Of Twilight and of the Grave” for an example. You have just been run over by the heavy cavalry of the new crusade. Best pray for a healer.

“Unending Spectral Bloodshed” is another fine moment in a field of many. A somewhat more relaxed pace greets you until they drop in the D beat type stuff and all hell breaks loose. I’m not a musician, so I’m not going to bore you with details, but Cleric most certainly possess the ability to keep it all lively, at all times, so you won’t find much repetition in this one at all, and that’s always a plus, at least for me. Keep me interested you fucks, and I’ll hang around all day.

Another highlight. “All Death Unseeing” starts of Doom – esque, then reaches down into the saddle bags and produces another blunt instrument of the damage casing kind, and mauls you around the noggin with savage effectiveness. This is the Death Metal you write home to His Holiness the Pope about, and then realise with a wry grin that the cunt will have you excommunicated for even listening to such blasphemy. Utterly superb in every aspect. “Forever Coils The Serpent” almost reminds me at times of Sweden’s Usurpress, and I do not say that lightly, for me they are one of the greatest bands of all time, and when I think about the whole picture here, I then realize that most of this reminds me greatly of them. Certain aspects have that stamp of excellence that makes one band rise well above the others, and here they are in abundance.

The closer, “Destroying Eye of the Self”, sums up my previous statement perfectly. This is nothing but class, and you’d better believe it. “Serpent Psalms” isn’t the fastest and most poisonous of snakes out there, but it will wrap it’s coils around you, and squeeze out every last ounce of breath you have. Crushing, brutal, Death Metal perfection.