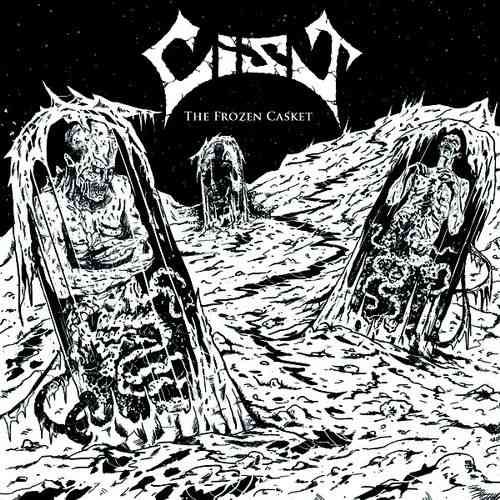 If you are a disciple of Underground OSDM and follow everything that is going on, you probably have heard of Cist. Maybe only by name or just the sheer coincidence you have bought the “Chemical Tomb” EP or the split with Solstice. If you haven’t heard of Cist and you dig some classic OSDM, you better remember the name vividly. After hearing this EP and you deny the fact that these Russians are hugely influenced by Death, you’re either a lying sociopath…or a politician. But is not only Death you hear, cause there are a lot of early Pestilence riffs and song structures present as well. When you listen to a song like “Cryonesia”, one thing should pop up into your mind; Pestilence’s “Consuming Impulse”. But in a good way, so I’m not talkin’ about cheap ass copy cats here. No, these guys know how to keep a good balance between a honourable homage and a twist of their own. The Redefining Darkness Records version of this album has 3 bonus tracks which featured on the aforementioned split and EP, so you have all recorded material at once. Still nice to witness the fact that underground acts can provide some nice tunes of which you think “hey…this was fun to hear”. (Ricardo)