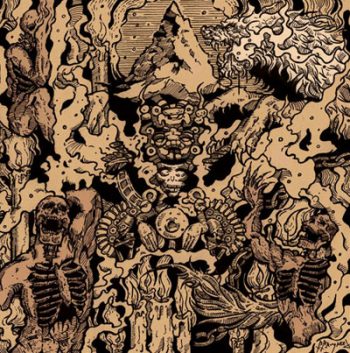 “The Nefarious Order” disc is a superb tactical move by the Dutch underground cult label Zwaertgevegt. Beautifully housed in a 12 inch LP format with all the assets, it features 4 exclusive tracks from 4 illustrious Dutch Black Metal bands.

First track is “Der Untergang III” by the internationally acclaimed Cirith Gorgor. This is yet another re-recorded version of the track that was featured on the “Cirith Gorgor” album from 2007 & ‘Der Untergang… / Победа!!!’ album from 2011. This the third rendition of the song, also features the vitriolic vocals from ex-member Satanael Mordenare Raben and altered lyrics. The track starts very energetic, with the brutal and harsh vocal acrobatics from Satanael and the typical shredding, raw but hypothermic musical style of the band …a well-constructed piece of blackened art, climaxing into an heroic choir of glorified nationalist anthem-like chanting. Goose bumbs all over for this sublime re-recording. And if Marduk are allowed to record an album on the topic of the bravery by the German soldiers at the Eastern Front, Cirith Gorgor are entitled to compose their tribute to all those who perished in the frozen battlefields during WW 2.

Yaotzin are next with their “Lucifer” track…This band has been active since 1996 and these veterans of the black order draw their inspiration from occult themes. “Lucifer” is a raw, dark, savage and obsessive opus dedicated to the Angel, bearer of the Light. The most beloved of all the angels. The vocals are quite unique. One can feel the disgust and the devotion to the Son Of Perdition. As usual, Yaotzin’s songs always create a craving for more.

Fenris are the third in line with “Ertha” which starts with some truly desolate yet magnificent fragile guitar solos, before bursting out in full glory, with maniacal hysterical growled vocals and pagan choral parts. Melody is maintained throughout the song and its composition is conceived that one memorable moment after the other consumes your entire being … The song is very intense. Fenris have already released three full length album that are described as Black/Viking Metal. Amazing song.

And last but not least Weltschmerz with “The Future Of An Illusion”. I detect some Nifelheim influences and cold metallic riffs in their rabid  Black Metal, but the attention is drawn to those bestial vocals. Multi layered guitars weave a rather depressive atmosphere of primal disillusion and angst before changing to more menacing guitar extravaganza. Impressive, to say the least. These are experienced musicians with 2 full length albums under their bullet belts. It’s a cluster bomb full of technical highlights without losing but an inch of aggression.

Verdict: The Nefarious Order is a little masterpiece featuring 4 unique Dutch  Black Metal bands at top performance. It’s one of those must-have items you can’t pass by. And my compliments to the renowned Zwaertgevegt label for making it happen. (LV)