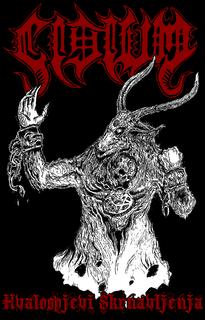 “Hvalospjevi Skrnavljenja” contains some Bestial War Metal created by Cidium, the Croatian anti-abrahamic Black/Death Metal Elite. After a couple of one-track demos and a demo released by Gravplass Propaganda on cassette, Bogojeb (vocals, guitars, bass) and Isten (drums) went to the Studio 3/4 Klub Kocka and recorded this full-length between 2014 and 2016. In the meantime Isten got replaced by Dejmenej and are operating as a three-piece with Uzurpator as guitarist and backing vocals, but both don’t feature on Cidium’s debut. A debut with influences of Beherit, Blasphemy and Archgoat in abundance and with the use of their native Croatian language, because of its ruthless-sounding nature, “Hvalospjevi Skrnavljenja” is one savage whole that ends with an Inquisition cover. Definitely not ground-breaking nor running for a top-flight position in any top 10-favourite list, but certainly worth checking out if you are fan of the aforementioned influences. (Ricardo)